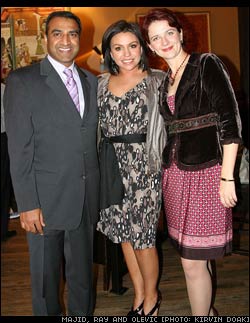 Culinary celebrity Rachael Ray was in Las Vegas this week shooting for two of her shows on the Food Network.

For her newest show, Rachael Ray Vacation, she visited Origin India restaurant (4480 Paradise Rd) and met with owners Raja Majid and Alena Olevic. During the show, she interviewed them and chef Bhuwan Bhatt, and showcased some of their special dishes for the episode.

She then brought her film crew to The Palazzo to tape segments for her Tasty Travels show at fellow celeb chef Mario Batali’s new Carnevino restaurant, as well as grabbing shots of her talking in the entry area to the resort.

She then headed over to film at one of my favorite eateries, the Hash House A Go Go at 6800 W. Sahara, as well as the Vintner Grill at 10100 W. Charleston.

No word on when these episodes will air.

Speaking of Hash House A Go Go, the restaurant is partnering with United Blood Services for a community blood drive this Saturday, April 26.

The event runs from 8am until 2pm, and all participants not only receive a free pancake, T-shirt and fresh-squeezed orange juice from the restaurant (yum!), but as an added incentive, all donors will also get vouchers redeemable for one ticket to see The Scintas at the Las Vegas Hilton and two tickets to see the Mega Bubble Show at the Miracle Mile at Planet Hollywood.

To schedule your appointment, call 702.228.8400 or visit www.bloodhero.com and use the code word “HASHHOUSE” when booking your slot to give. 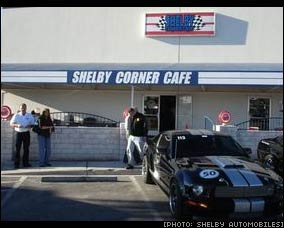 Auto enthusiasts who visit the Shelby Automobile headquarters near the Las Vegas Speedway will now be able to partake in a new experience, as the Shelby Corner Cafe is now open to the general public.

Originally opened as a place for Shelby employees to eat lunch, the restaurant caters to both race fans and those enamoured of the Shelby brand of cars with a decor that includes racing memorabilia such as photos, car parts and televisions showing Shelby video footage.

The 13,000 square foot cafe features a classic Americana menu with breakfast served from 6am to 11am. Lunch crowds can enjoy hamburgers, salads, sandwiches and founder Carroll Shelby’s Classic Chili from 11am to 2pm. The restaurant also offers guests a coffee bar and free Wi-Fi.

“Shelby Corner Cafe is a fun place to dine while visiting Carroll’s two favorite places, the track and his factory,” said Amy Boylan, President of Shelby Automobiles. “We initially planned to open a place for Shelby employees as the selection of eateries is a bit limited at the Speedway. We had so many requests by enthusiasts to eat here after a museum tour that decided to open the cafe to the public. On any given day, you might see our chief test driver, production crew, or even Carroll himself eating at the next table.”

Shelby Automobile and the Shelby Corner Cafe are located at 6755 Speedway Blvd. The museum is open 8am until 4pm daily with free factory tours at 10:30am every Monday through Friday.