The Hard Rock Hotel has begun hiring at top levels for a new restaurant that will open this spring as part of the resort’s multi-million renovations. Called Rare 120, it’s the newest concept from The Dolce Group, known for L.A. hotspots like Geisha House and Ketchup.

In the press release, TDG describes it as a “new breed of steakhouse where the food is as important as the atmosphere.” Well, for the amount of money I’m expecting they’ll charge for a steak, it had better be more important, so let’s see what they can deliver. 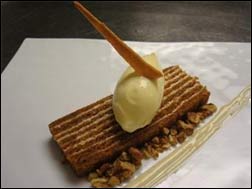 Wolfgang Puck has introduced a new dessert at three of his Vegas restaurants that sounds particularly yummy.

It’s a 15-Layer Carrot Cake which, as the name suggests, consists of fifteen alternating layers of cake and cream cheese filling. The cake is then adorned with candied walnuts and served with a ginger ice cream, which is said to complement the spices in the cake.

The seasonal dessert was created by Director of Pastry Kenny Magana and is priced at $12. It’s available at Wolfgang Puck’s Chinois and Spago, both located inside The Forum Shops at Caesars, as well as at the Wolfgang Puck Bar & Grill at MGM Grand.

Brand Steakhouse at The Monte Carlo is running a $59.99 dinner for two special. It includes a starter of mixed greens or Caesar salad, a Prime “Strip Iron” steak with gratin potatoes and spinach for sides, and your choice of one dessert to share, either donuts or creme brulee. The offer is available Sundays through Thursdays, until further notice. For reservations, call 702.730.6700.