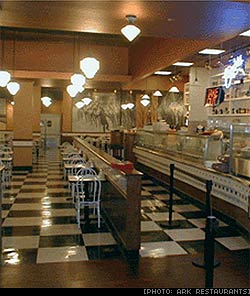 To those who enjoy a good sandwich, the Stage Deli at The Forum Shops at Caesars Palace was as popular an attraction as anything else at the resort.

Unfortunately, it seems as though the regular fans weren’t enough to save the restaurant, which closed its doors this week after fifteen years.

According to Norm Clarke at the LV Review-Journal, high rent is behind the closing of this spin-off of the popular New York City restaurant.

No word if parent company ARK Restaurants will relocate the Stage Deli elsewhere, but rumors are the empty space it leaves at The Forum Shops will be filled by another high-profile retail shop in the near future.

The Silverton’s Twin Creeks restaurant is offering a summer special to all diners.

Simply make an advance reservation to dine between 8pm and 10pm and purchase two entrees, and you will have your choice of a free bottle of wine from a list that includes Echelon Vineyards and Robert Mondavi selections.

The buffet at Boulder Station is closed until at least the end of the year for what Station Casinos calls “a complete and significant overhaul and expansion.”

It will reportedly be twice as big when it eventually re-opens, which the company says will be about four to six months from now.

The hotel still has plenty of dining options to choose from in the meantime, including The Broiler (steak and seafood), Guadalajara (Mexican) and the Pasta palace (Italian).

The Grand Cafe coffee shop at Green Valley Ranch has two decent new steak specials that have been getting decent reviews.

The first is a steak & shrimp meal that features a bone-in New York strip steak and three breaded shrimp, and comes with soup or salad, bread, baked potato, onion rings, and a slice of pie for dessert, all for $12.99. It’s available 24/7.

The second is an unadvertised dinner special featuring a 16-ounce rib-eye dinner that comes with soup or salad, bread, potato, and vegetable for $16.99. You have to ask for this one because it’s not on the menu.