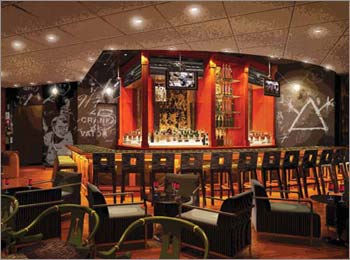 First Food & Bar has opened over at The Palazzo. This eatery is described as a NYC neighborhood-style bar restaurant with an upscale feel, and is the brainchild of Sam DeMarco. Vegas vets may remember he had an eatery called Sam’s American Bar and Grill over at the Bellagio in the late 90s, when that hotel first opened.

I haven’t had a chance to review it yet, but the eatery serves from breakfast through latenight. The menu features owner Sammy D’s idea of comfort food, like the Midwest Killer (sunnyside-up eggs over a Kentucky fried pork chop, with creamy grits and homemade biscuit & gravy), Philly Cheesesteak dumplings and a soy-honey marinated duck. There’s also burgers and sandwiches for the more traditional pub-grub eaters.

Also believing that hair ‘o the dog is always the best way to start and end the day, alcohol is on the menu from open to close, including signature morning drink options like the Breakfast Martini (Bombay Sapphire, Cointreau, orange marmalade and lemon juice) and “The Jackass” platter (pancake, French toast, waffle, Jim Beam Ham, and a shot of Wild Turkey’s Honey Bourbon).

First Food & Bar is open from 7am to 4am, Sundays through Wednesday, and 7am to 6am, Thursdays through Saturdays. Prices on the published menus seem a bit high but then again, it is at The Palazzo.

EatingLV did a great review of First Food earlier this month, with some yummy photos to boot.

Opened in partnership with Danny Koker, owner of Counts Kustoms bike shop, the August 2nd grand opening celebration of the bar featured a live performance by Neil on the club’s 30-ft stage, as well as appearances by many of Neil’s celeb friends.

When national acts aren’t in town, members of Neil’s backing band will be performing as the house band on the weekends.

The menu looks pretty traditional, with everything from burgers and fries to jalapeno poppers, at prices that are pretty easy on the wallet.

Located at 6750 W. Sahara (near Rainbow Blvd), the rocker and biker-friendly bar/restaurant is being described as a down-to-earth party venue where the only dress code is you have to be wearing something. At least until the tequila starts flowing. They say there’s plenty of car and bike parking, as well.

The location will be home to another pub when the resort opens up The Pub on September 2. Yup, just “The Pub” – due to the fact that they no longer brew on premises as they did when the old venue opened to the public years ago.

According to Monte Carlo reps, The Pub will feature 50 bars on tap, along with a general pub-type menu of eats like burgers. It will also feature plenty of TVs throughout the venue to watch the latest sporting events, as well as music from resident in-house band Zowie Bowie, who are making the move to the Strip.