Looking for somewhere new to eat on the southern end of the Strip? The Tropicana has just opened two new eateries in the middle of its $125-million property-wide renovation.

Bacio Pasta & Vino is a casual dining Italian restaurant featuring everything from pizza and calzones to hearty pasta dishes like Lobster Bucatini and spaghetti with meatballs. The sit-down restaurant also offers over 30 different wines by the glass or bottle. Hours of operation are 11 am to 10 pm. 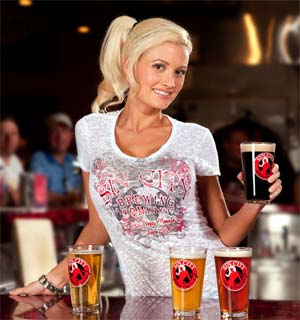 For those looking to grab a quick brew as they shop, Las Vegas microbrewery Sin City Brewing Co has opened its third Strip location inside the Grand Canal Shoppes at The Venetian.

“With our original recipes and hands-on brewing process, we’ve created a line of beer that fully lives up to the reputation of Las Vegas,” said Rich Johnson, the company’s president and an award-winning craft brewer. “No visit here is complete without having a beer at Sin City Brewing Co.”

Sin City Brewing Co. at The Grand Canal Shoppes at The Venetian is open from 10 am to 11 pm Sunday through Thursday and 10 am to midnight, Friday and Saturday. The other two locations are at the Miracle Mile Shops at Planet Hollywood and at the Flamingo.

B.B. King Blues Club is set to open a Vegas outpost at The Mirage in November. Similar to the House of Blues, the menu features a collection of Southern comfort food, with a Creole touch, with items like BBQ ribs, Gumbo Ya Ya, Southern-fried catfish, etc.

Every evening will also feature live music from blues artists, both local and internationally known. King himself may occasionally grace the stage.

The restaurant/music venue will be located across from The Beatles REVOLUTION Lounge and next to Samba Brazilian Steakhouse. The eatery portion will serve from breakfast to late-night, and the music club portion will run until 2am on weekdays and 4am on weekends.