What to Eat in Las Vegas: Famous Las Vegas Dining

For many people, dining in Las Vegas isn’t done out of necessity. Rather, eating in Sin City is experience to be sought out, appreciated and enjoyed. Just as New York City is renowned for its restaurants, Las Vegas dining is noteworthy for its own reasons. The city not only has a handful of iconic diners, but it’s also home to celebrity chefs, a few historic restaurants and the dining establishment that’s become synonymous with Las Vegas—the all-you-can-eat buffet. 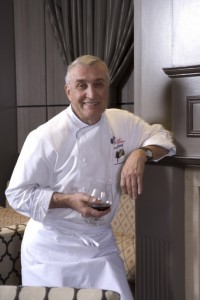 Dining in Las Vegas is like one big season finale from Iron Chef and Hell’s Kitchen combined. Dozens of celebrity chefs have opened up restaurants in Las Vegas. These range from classy, high-end meals such as those found at Joël Robuchon at MGM Grand to creative, fun and accessible dining experiences like those offered by Kerry Simon at Simon and KGB, a gourmet burger joint.

What is perhaps most exciting about the celebrity chef presence in Las Vegas is simply the fact that everyone seems so accessible. When you dine at a celebrity chef-run restaurant, it’s not uncommon to see these food connoisseurs wandering the floor of the restaurant, checking in with patrons to inquire about their dining experience. Even if you don’t catch a peek of the chef, you’re just two steps away from fame. Ask your waiter or waitress what it’s like to work with Wolfgang Puck or Emeril Lagasse, and chances are you’ll learn a little something about what makes the kitchen so special.

Whether they’re tied to the Rat Pack or memorable for their Las Vegas mob encounters, there are a handful of restaurants in Las Vegas known for their historic background. Staff at Battista’s Hole in the Wall (located at 4041 Audrie Street), which is packed with thousands of knick knacks collected throughout Las Vegas’ history, has been serving up Italian food for more than 30 years. The Bootlegger Bistro (located at 7700 South Las Vegas Boulevard) is a kickback to 1950s Las Vegas, and while the legendary entertainment can be a bit raunchy, it has served as home to many big name Strip stars in years past.

Golden Steer Steakhouse (located at 308 West Sahara) is considered by some to be the last old Las Vegas restaurant. Over the years, this restaurant saw the likes of Frank Sinatra, Sammy Davis, Jr., Dean Martin and many other noteworthy figures.

In addition to Battista’s Hole in the Wall, the Bootlegger Bistro and Golden Steer Steakhouse, consider stopping by Tiffany’s Cafe (located at 1700 South Las Vegas Boulevard) and Atomic Liquor and Cocktails (located at 917 Fremont Street). Though not necessarily noteworthy for the food, Tony Roma’s (located at 620 East Sahara) is where Frank “Lefty” Rosenthal was involved in a car bombing tied to the mob. 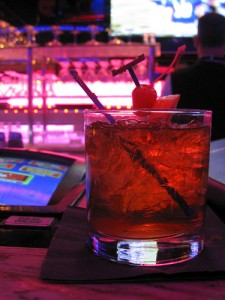 The unfortunate thing about Las Vegas is that the history that has built the city seems to fall just as quickly as it arrives. As a result, there aren’t a ton of iconic Las Vegas restaurants. For the best selection of dining establishments that have been around for awhile, your best bet is to head to downtown, home of vintage Vegas. Vic & Anthony’s Steakhouse, located inside the Golden Nugget, is a fine dining option while the Golden Gate on Fremont Street serves up $1.99 shrimp cocktails, which it’s been doing since 1959.

In addition to Vic & Anthony’s and Golden Gate’s famous shrimp cocktails, grab a bit of iconic Las Vegas at Lawry’s on Howard Hughes Parkway or Steak House at Circus Circus. At Mr. Lucky’s at Hard Rock Hotel, check out the iconic memorabilia and order the steak and shrimp special, which isn’t on the menu. Finally, no Las Vegas visit is complete without a meal at The Peppermill and Fireside Lounge.

What is a Las Vegas vacation without the all-you-can-eat buffet? The start of the Las Vegas buffet can be traced back to the El Rancho Vegas, which was the first hotel that opened on the present day Las Vegas Strip in 1941. Throughout the years, the buffets grew in size, selection and popularity. Today, nearly every Las Vegas resort has a buffet. Some offer gourmet cuisine and others charge bottom dollar.

Everyone has a favorite buffet for a different reason, but there are a few that stand out from the others. People love Le Village Buffet at Paris Las Vegas for its French-inspired cuisine, and the buffet at Wynn Las Vegas also serves up high-end entrees. Of course, buffet dining isn’t limited to the Strip. At Main Street Station, the Garden Court Buffet gets accolades for its live-action stations.

The options for buffets in Las Vegas are practically limitless. In addition to the buffets at Paris, Wynn and Main Street Station, consider checking out Simon at Palms Place for the Sunday brunch buffet, Studio B Show Kitchen Buffet at M Resort for the desserts and Carnival World Buffet at Rio for the all-around experience.