This past Friday, the Light Group opened the doors to its newest dining venture, Yellowtail Sushi Restaurant & Bar at the Bellagio, with a grand opening celebration.

Following tradition, Bellagio president Randy Morton joined exeutive chef Akira Back and others involved with the restaurant in a Japanese Sake Barrel ceremony. During the event, a barrel full of said sake is broken open by wooden mallets for good luck and then the beverage is served to everyone in attendance.

Here are a few photos from the event: 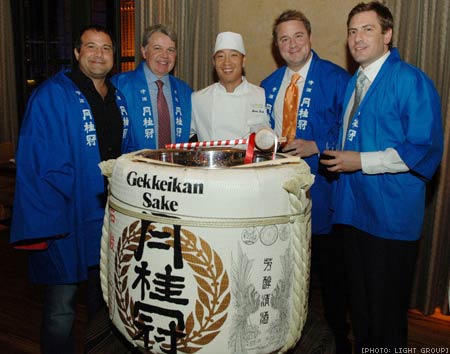 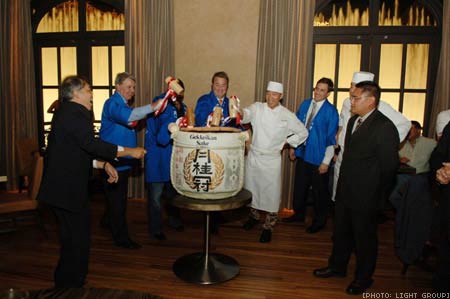 As we mentioned previously, Yellowtail replaces Bellagio’s former fine dining sushi restaurant Shintaro. Back has been very hands on, creating a new menu that relies on seasonal fresh ingredients flown in daily and unusual combinations. some of the menu’s more interesting offerings include Ahi Tuna Pizza with shiso (an aromatic mint-like herb popular in Japan); Maine Lobster Carpaccio with onion and cilantro; Kobe Beef Tataki with shaved garlic ponzu; and a quesadilla made with Japanese rice crackers.

And while Yellowtail retains the view of the famous Bellagio fountains, the entire restaurant area has been redone from the former white, airy design to a more warm and intimate design.

Shintaro is on the left and Yellowtail is on the right.

Yellowtail will serve dinner starting at 5pm, ending at 11pm Sundays through Thursdays and at midnight on Fridays and Saturdays. It joins other Vegas eateries owned by the Light Group, including Fix, Stack, Diablo’s Cantina and recently opened Brand Steakhouse at the Monte Carlo (which I’ll be profiling next month).