If the Palms resort resembles Hollywood more than normal for the next ten days, it’s because the CineVegas Film Festival begins tonight.

For ten years, the little fest that could has grown to a star-studded industry event, and this year will be no different. 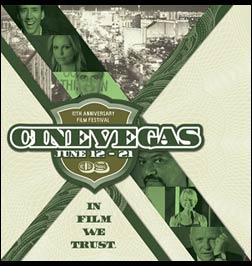 The majority of the festival’s events take place at the Palms, with the resort’s Brenden Theatres playing host to most of the films being screened.

The whole event kicks off with the star-studded screening of The Rocker tonight at the Palms, with tickets still available at $15. The after party at Moon is sold out, but you might still be able to see some stars during the red-carpet arrivals that takes place prior to the screening at 6:30pm.

On Sunday, June 15th, CineVegas hosts a special charity premiere of the upcoming blockbuster Get Smart at Planet Hollywood with an appearance by several of the movie’s stars including Dwayne “The Rock” Johnson. Tickets for the screening range from $25 to $45 and there are also a limited number of sponsorship packages that includes a meet-and-greet with Mr. Johnson. A portion of the proceeds will benefit The Rock Foundation’s Project Knapsack, which will funnel the donation into providing school supplies and educational resources for schools in Las Vegas. The movie opens in theaters nationwide on June 20th.

On Monday, June 16th, CineVegas will host a special screening of Takashi Murakami’s animation piece Planting the Seeds at the Lake of Dreams at the Wynn Las Vegas. Tickets are $25 for just the screening, or you can make it a night with a combination package that includes your choice of dinner at Daniel Boulud Brassiere (for $145 a person) or SW Steakhouse (for $160 a person). To purchase either of these packages, please call 702.770.DINE (3463).

Other cinematic highlights of CineVegas include the world premiere of Dark Streets on Saturday, June 14th, followed by a charity concert at the Palms pool afterwards, with performances by Bijou Phillips, Chris Thomas King and other musicians from the film and a June 18th screening of the documentary All Together Now, which chronicles the making of the Cirque du Soleil/Beatles show LOVE (the doc is out on DVD June 24th).

During the festival, several actors will also be given awards in recognition of their careers. Receiving the “Half-Life Award” will be actors Don Cheadle (Hotel Rwanda; Oceans 11/12/13), Rosario Dawson (Rent; Sin City), Sam Rockwell (Confessions of a Dangerous Mind; Charlie’s Angels) and Viggo Mortensen (A History of Violence; Lord of the Rings trilogy). Cheadle’s event takes place June 20th at 4pm, followed by Mortensen at 6pm. The other two will be honored on June 21st — Dawson at 1pm, Rockwell at 3pm — followed by a screening of Rockwell’s latest film Choke.

June 20th is also when James Caan will receive the Vegas Icon Award for his many award-winning roles such as The Godfather and Brian’s Song, as well as a recent turn as head of the Monticito in the TV series “Las Vegas.” His event takes place at 8pm at the Planet Hollywood pool. The great Angelica Houston is also being honored with the Marquee Award for her impressive body of work on June 21st, at 5pm. She has won everything from Oscars to Golden Globes and has appeared in films ranging from the Addams Family to The Royal Tenenbaums. She also appears in Choke with Sam Rockwell

Tickets for all honoree award tributes are $15, but they are nearly or completely sold out. Standby tickets may be available at the box office prior.

CineVegas closes on Saturday, June 21st, with The Great Buck Howard, starring John Malkovich, Steve Zahn, Emily Blunt, Colin Hanks, Tom Hanks (who also co-produced the film). Many of the film’s stars are expected to show for this event, with tickets still available for $15 a piece.

Tickets for most other films are a mere $10 each and a complete listing of them can be found online. You can purchase tickets for all events at the theater box office, at the CineVegas website or by calling 888-8VEGAS8.