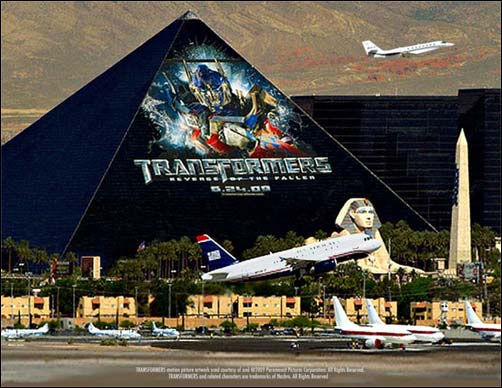 To kick off this new feature, I present to you the Luxor serving as a large billboard to advertise the upcoming release of the new Transformers movie, Revenge of the Fallen.

The image is of the Autobots leader Optimus Prime bursting forth from the front of Luxor pyramid and comes courtesy of the movie studio, Paramount/Dreamworks. The film hits theaters next week on June 24, 2009.

While visually stunning, and I’m sure revenue-generating, I often get tired of seeing the hotels being used as gigantic billboards – especially when advertising something that, to my knowledge, has nothing to do with Las Vegas. I do remember nearby Hoover Dam making a cameo at the end of the original Transformers film, but in all the media I’ve seen on the new sequel, I’ve yet to see anything that looks like Las Vegas.

What are your thoughts on Vegas hotel exteriors being used as gigantic billboards? Does it bother you at all? Or is it ok as long as it helps keep prices down by generating money for the resort? Sound off in the comments.

I suppose it could be worse… it could be an ad for Believe with Criss Angel bursting forth from the Luxor building.