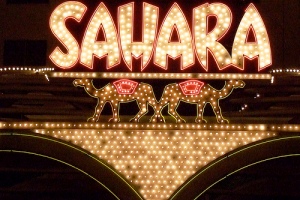 Editor’s note: The Sahara closed permanently in May 2011.

Ever since it opened, Sahara Hotel & Casino has been the home to the hottest entertainment on the Strip. Today, guests can enjoy the shows in the popular Sahara Theater, the Congo Room and the intimate Casbar Theater Lounge. Between comedy shows, live music and a magic show, everyone will be pleased here.

The show is famous for finding the best new comedians. Since the show opened in 1983 many of those who performed here have become superstars of television and film.

The Magic & Tigers of Rick Thomas

The show offers unique and intriguing illusions, combining magic, music, dance and exotic animals in one show. The beautiful royal white and orange Bengal tigers have dazzled audience around the world.

Thomas started performing magic when he was 7 and by 18 he was performing at the Disneyland Hotel. Then he took the show on cruises. His ability to perform the show in any setting has made him famous in both the United States and Canada.

The show takes place at 5 p.m. each night in the Sahara Theater. General admission is $49.95. VIP packages are available.

Although Buddy Hackett died in 2003, he is back in Vegas, via recordings. His voiceover recorder before he passed is used as the voice of God and during the show he is sending the legendary Rat Pack—Frank Sinatra, Dean Martin, Sammy Davis, Jr. and their comedic catalyst Joey Bishop- down from heaven for one last show on earth.

The show offers a fresh take on the comedic and musical legacy of the Rat Pack. Buddy’s own son, Sandy, presents the show which comprises unique original live recordings. The cast comprises some of the best performers and they will certainly make you relieve the music, comedy and unexpected surprises of the Rat Pack.

Many specialized publications have been giving awards to this lounge for the outstanding nightly entertainment. Shows start at 9 p.m. and there’s no cover charge.