Word comes this week that an iconic Vegas landmark, Binion’s Gambling Hall & Hotel, will be shuttering its hotel portion this month. 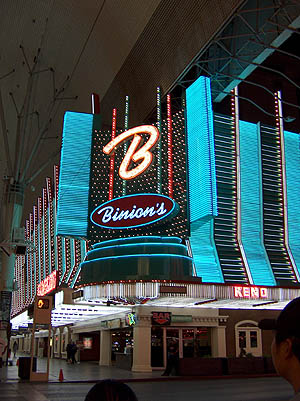 Binion’s, which first opened on Fremont Street downtown in 1951, is best known for hosting the World Series of Poker for 34 years. But declining revenues has forced current owner MTR Gaming to close down its 365 rooms, along with Binion’s Original Coffee Shop and the keno room.

MTR says they plan to leave open the casino, which faces out into the Fremont Street Experience, along with the sports book, poker room, and Binion’s Ranch Steakhouse, which sits on the 24th floor of the property.

December 14, 2009, is the date set for the closures, which will result in about 100 workers being laid off.

MTR stresses that should the economy warrant it, they may consider re-opening the hotel at a later date, but at this time, there has been no decision made as to the length of the closures.

The company also owns the neighboring Four Queens Hotel, and says guests booked at Binion’s after December 13, 2009, will be accommodated at Four Queens instead. Binion’s website is already directing potential guests to the other hotel.

Ironically this news comes at a time when the Golden Nugget, which lies directly across Fremont Street from Binion’s, has opened a new luxury tower of rooms. So then one has to ask the question how one hotel can open a $100-plus a night tower of rooms, yet right next door, a hotel of bargain rooms averaging prices a third of that has to close for lack of business?