For those who want to camp out on The Strip, the KOA Circusland RV Park located at Circus Circus has just added a few new Airstream trailers to their location. 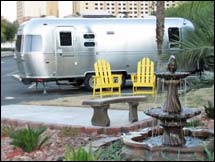 Fitting in with the nostalgia vibe of Vegas, these Airstream units will sleep up to four people in a configuration of one queen bed and two twins. Each unit also features a small kitchenette, linens, dishes and two TV’s.

Normally, a night in an Airstream will start at $99 a night, but as special introductory offer, the KOA is offering rates as low as $45 for select dates in January and February 2009 – even on weekends, which is a fantastic deal! Plus KOA Value Kard members save an additional 10% on each booking.

The KOA is the only RV park located directly on The Strip and features 366 sites with full hook-ups. Guests have full use of the KOA amenities, including a Great Room with a big-screen TV, an espresso bar and six free internet kiosks. Free wifi is also available, as is a 24-hr convenience store and coin-operated laundry facilities. This KOA is even pet friendly, offering a dog run area.

Guests of the KOA, including the new Airstreams, are also allowed to use Circus Circus amenties such as the swimming pool and more.