With construction nearing the end on the long-awaited CityCenter project, several of its hotels will start taking reservations next month. 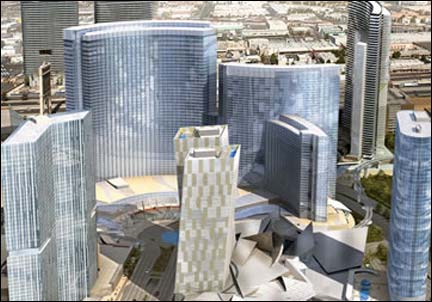 An all-suite hotel, The Vdara is a non-gaming smoke-free tower on the northern edge of CityCenter. It will also be connected to the neighboring Bellagio via a pedestrian walkway.

Guests at The Vdara will be able to enjoy a 16,000-sq-ft two-level spa, salon and fitness complex, along with an outdoor year-round pool with 19 cabanas situated above the hotel’s porte cochere. Dining and nightlife options will include Silk Road, described as a “modern trans-ethnic” restaurant; Bar Vdara, a lobby lounge; and a Gourmet Grocer for stocking each suite’s kitchen area.

The Aria is scheduled to open two months later, on December 16, 2009, and is set to be a focal point for the CityCenter complex.

From the outside, the curved steel and floor-to-ceiling glass give the property a futuristic look, but inside the decor will utilize more natural elements such as wood, stone and the natural light let in by the expansive glass to lend a warmth to the atmosphere.

Business people and tech geeks will enjoy advanced level of automation integrated in each room, such as personalized controls that operate everything from room temperature, music, curtains and lighting to highspeed wi-fi that is up to eight times faster than any other resort on the strip.

Hungry guests can indulge themselves in sixteen on-property restaurants, including Chef Michael Mina’s American Fish (which offers fresh seafood in an upscale lodge setting), Jean-Georges Steakhouse, and Bar Masa (a modern Japanese cuisine restaurant by Chef Masayoshi Takayama). Ten bars and lounges will round out the liquid libation offerings.

Also scheduled to open in early to mid-December is the Crystals retail and entertainment district. The Mandarin Oriental Hotel has a ballpark opening of late-December/early-January and The Harmon was originally scheduled to open this year, but due to previously mentioned construction issues, will now open sometime in 2010.