While downtown Las Vegas has been one of the last few hold-outs of old Vegas – that of the cheap hotel rooms – the Golden Nugget has set out over the last few years to change that. 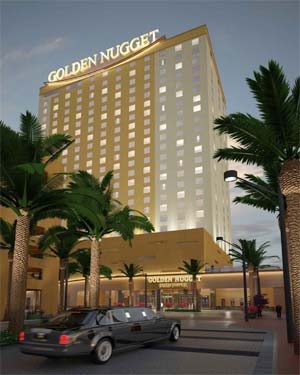 First came the renovations, then the addition of new pool area, complete with a water slide through a shark tank, and several new dining and nightlife areas.

This weekend, the hotel set the downtown bar even higher by opening the property’s new Rush Tower. This $150 million addition to the hotel definitely adds a modern luxury touch to the Golden Nugget, which already was the most upscale property on Fremont Street.

Guests can directly access the new tower via a new million dollar landscaped entrance at First and Carson Streets. A 75,000-gallon tropical aquarium sits in the lobby, along with the private check-in desk for the tower. The Rush Tower gives the Golden Nugget 500 additional rooms, which are 20 percent larger than the rooms in the hotels North and South standard rooms. These rooms also feature a different decor, complete with pillow-top mattresses, feather down comforters and 42-inch plasma TVs. The tower also has four Penthouse Suites and 70 Junior Corner Suites.

Besides upgraded accommodations, the Rush Tower also houses the new Chart House Restaurant, which offers seating for 200 in a aqua-colored room accented by another view of that 75,000-gallon fish tank that sits in the lobby. The Chart House menu is decidedly upscale seafood, with pricing to match. It is open for lunch and dinner, as well as Sunday brunch.

Other amenities offered by the addition of the Rush Tower include new upscale boutique stores, a lobby casino and a two-level infinity-edge pool area that adjoins the third level of The Tank, the aforementioned shark tank swimming pool area.

Rates for the Rush Tower rooms are said to start in the $100-$150 range for midweek stays, though I’m sure value season discounts will start appearing once the initial “newness” rush to book these rooms passes.

Here are some additional images of the Rush Tower lobby, along with a king size guestroom: 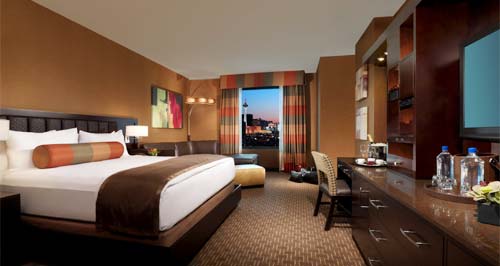 What do you think of the new tower? Is this luxury addition to downtown Vegas a good thing, or should Fremont Street remain an area of older hotels with cheap rooms? Let us know in comments.