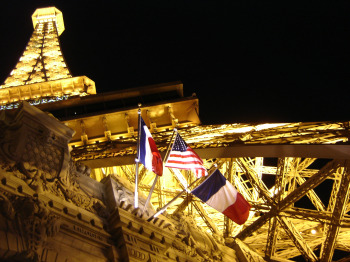 A popular postcard you can buy in Las Vegas has pictures of the New York and Paris casinos on The Strip with the tagline, “New York to Paris in 10 minutes!” There’s no denying the whimsical appeal of seeing an assortment of the world’s famous landmarks lined up right next to each other – but is that Vegas beauty more than skin deep?

I’m someone who loves Europe, so on a recent visit to Las Vegas my question was whether it’s possible to experience Europe in Las Vegas. By looking at the names of some of the big casinos, you’d think it would be a no-brainer – but as the old saying goes, you can’t always judge a book by its cover.

Here’s how a few of the places you can visit in Las Vegas that pay homage to Europe. 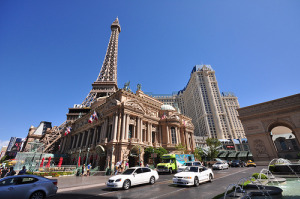 The Paris Las Vegas is one of the Strip’s more glaringly obvious nods to Europe, with the half-size replica of the Eiffel Tower (which is painted, incidentally, the exact same color as the original) and 3/4-scale replica of the Arc de Triomphe out front, and it’s undeniably from the outside that you get the biggest “wow” factor of this casino. But although the interior is nothing remotely like the real Paris, I give the Paris Las Vegas credit for cotninuing the Paris theme onto their casino floor.

The legs of the Eiffel Tower come through the sky-painted ceiling to the casino floor (one of the leg bases even serves as a public bathroom, in which the soundtrack is a steady stream of ridiculous pick-up lines translated from English into French), and all the storefronts are faux-French. One of my favorite things inside, however, was the “cobbled” lanes – all the hallways in the main area are uneven, so rolling a suitcase from reception to the guest elevators is oddly reminiscent of pulling a suitcase over real cobblestones in Europe. Très clever.

Perhaps the most authentically French experience at the Paris Las Vegas is at the Mon Ami Gabi restaurant at the front of the property. Sitting outside spoils the illusion somewhat, as you can clearly see the Vegas Strip, but inside the glassed-in atrium you can absolutely be transported to Paris. The cafe au lait served in a big bowl helps, too. 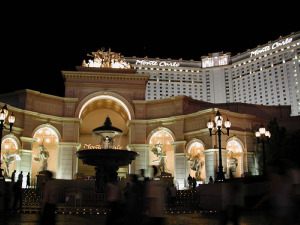 The Monte Carlo Resort and Casino may be named for the famous (and beautiful) casino in Monaco, but it bears no resemblance to the actual Monte Carlo Casino – and really, it isn’t supposed to.

Las Vegas’ version of the Monte Carlo was opened in the mid-1990s under a different name, and only later was the name changed to evoke the glitz and glamor of Monaco.

So rather than starting with a Monaco theme and building it into every aspect of the property, the name was given later to a hotel that – although perfectly nice and elegant inside – bears no resemblance to Monte Carlo. 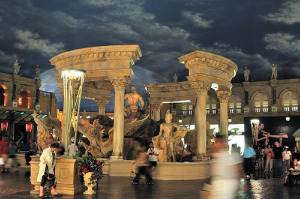 The name Caesars Palace conjures up images of old-school Las Vegas, but today’s Caesars is a very different place. Among the more obvious Italian landmarks you’ll see is the Colosseum – former home of Celine Dion’s and Elton John’s Vegas residencies – but Caesars Palace isn’t really an ode to the city of Rome. It’s meant to be an ode to the Roman era.

White marble statues that look like they might have adorned the gardens of well-to-do Romans are tucked into niches throughout the hotel, and doorways (including in the wedding chapels) are flanked by solid marble columns. Somewhat inexplicably, since Michelangelo came along quite a few hundred years after the fall of the Roman empire, there’s an 18-foot-tall David statue in one of the marbled hallways of the “Appian Way” shopping area. And although I think it’s just a general nod to the hotel’s Italian theme, it does show that the Italy you’re meant to think of when you’re at Caesars Palace isn’t necessarily anything like the real thing. 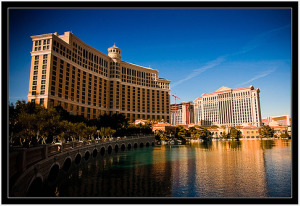 When it comes to hotels paying subtle homage to a place, however, I think The Bellagio wins hands down. This incredibly elegant property is beautiful at every turn, from the intricately-laid marble floor mosaics to the gorgeous seasonal flower exhibit in the Conservatory to the show-stopping Chihuly chandelier over the reception hall – but there’s also nothing about The Bellagio that overtly says “Italy” to me.

The hotel is named after a pretty town on the shore of Lake Como, one of Italy’s most famous lakes, but rather than try to duplicate the scenery around the lake or decorate storefronts to look even vaguely Italian, The Bellagio chooses instead to exude what many people think of as Italian splendor. The property may not look like anything in Italy, but it’s what people want Italy to look and feel like. And the Italy of the rich and famous may very well look like The Bellagio (I’ll have to get back to you when I’m rich and famous in Italy). 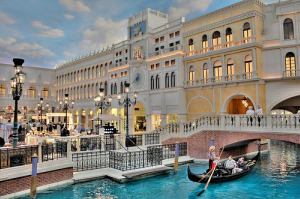 Like the Paris Las Vegas, The Venetian’s odes to Venice are more on the obvious side of the scale. Venice’s iconic bell tower may not be as recognizable the world over as the Eiffel Tower, but the bell tower’s there, alongside a building with a facade designed to look just like the Doge’s Palace. But it’s the area of the property called “Grand Canal Shoppes” that will really throw you for a surreal loop if you’ve been to Venice before.

First of all, as the name should indicate, there is a canal running through the middle of shopping “lanes.” Nevermind that this indoor canal is, unlike the real thing, swimming-pool clear – the canal has several Venetian-style bridges spanning it, and there are full-sized gondolas (piloted by singing gondoliers in striped jerseys) floating by. I think the Vegas version of a gondola ride has all the romance of the original (which is to say, not much), given the gawkers and photographers making the experience decidedly less-than-intimate, but there’s no denying the novelty of having a canal inside a hotel.

The pièce de résistance, however, comes when you turn the corner and enter The Venetian’s version of St. Mark’s Square. There’s no St. Mark’s Basilica, but the faux piazza is pretty and beautifully lit: the sky-painted ceiling actually fades to dusk as the sun sets outside.

The Venetian has an array of restaurants (covering several national cuisines) to choose from, but the Italian notables are Mario Batali’s pair of eateries – Enoteca San Marco and B&B Ristorante. Oddly, one of the best French restaurants in Las Vegas isn’t in a French-themed hotel, but in The Venetian – Thomas Keller’s fantastic bistro Bouchon. 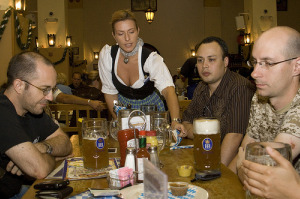 In my opinion, the closest Las Vegas comes to evoking Europe is through its food – there are restaurants in Vegas that serve up authentic fare, even if they do it surrounded by neon lights. So I shouldn’t have been surprised to find that at the Las Vegas Hofbräuhaus the food and beer are absolutely like what you’d get at the real Hofbräuhaus in Münich.

The Hofbräuhaus Las Vegas is off The Strip, but worth the side-trip – that is, if you like giant steins of Bavarian beer and plates heaped with sausages, sauerkraut, and sweet mustard. The experience isn’t so transportive that you’ll forget you’re in Las Vegas – the goofy non-stop musical act in the corner and the woman snapping photos (later offering them as picture keychains) make that a little tough. But if you can ignore all of that and focus on the great German beers and food, you’ll have a wonderful Bavarian time.

If you love Europe, and you go to Las Vegas expecting to find a little piece of Europe there – like some kind of Epcot Center with gambling – you’re going to be disappointed. If you can appreciate the whimsical nods to Europe that you’ll find in a few places in Las Vegas (and dig in unapologetically to some really great European restaurants), then you’ll enjoy Las Vegas for what it is.

And then, if you’re still craving the real Europe, you can go there next. Ain’t travel grand?

You should know that the impetus for this article was a press trip I participated in when my visit to Las Vegas was comp’d by the nice folks at the Paris Las Vegas. The opinions expressed in this article are, however, entirely my own.

photos, top to bottom, by: Jessica Spiegel (and may not be used without permission), stephenhanafin, cliff1066, Gregory Moine, Brian Struble, slideshow bob, pinguino