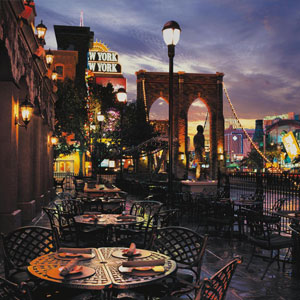 New York New York is a hotel and casino located on the Las Vegas Strip. It is owned by MGM Mirage and it uses the New York theme. Its architecture resembles the New York skyline and two of its towers are configured to resemble buildings such as the Empire State Building and the Chrysler Building. And the resort is complete with a Statue of Liberty replica.

After the 9/11 attacks, people sent various tributes to the resort, which are now on display along the fence in front of the “Lady Liberty” replica. Eventually, a permanent memorial was added.

Hotels/resorts near-by: New York New York is located between Excalibur Hotel & Casino and Monte Carlo Resort & Casino , just opposite MGM Grand Hotel & Casino . It is linked by overhead pedestrian bridges to its neighboring casinos to the south (the Excalibur) and to the east (the MGM Grand).

The hotel offers a total of 2,024 rooms and suites.

The casino offers 84,000 sq ft gaming space and features table games, slots and a race & sports book section. The table games include poker, blackjack, craps, roulette and mini baccarat. The slots denominations range from $0.01 to $100 so everyone can afford having fun here.

New York New York is definitely a place for those looking for upscale accommodation. Suite rates start at $210 per night, while rooms start at $145 per night. Special promotions are available so you can save some money and/or upgrade to a better room/suite. For example if you book 3 nights accommodation in the Park Avenue Strip View room, you get the lowest night free. And the Spring Break escape packages and the Couples Package start at only $61- 65 per night.

New York is known for it excellent food and New York New York wants to live up to the expectations. They’ve built their restaurants around the special flavors that make Big Apple so interesting! So you can take a walk along the world’s cuisines, sampling anything from American traditional food to Italian, Asian and anything else in between. And let’s not forget about the ESPN Zone, which is a very interesting and unique sports-themed restaurant which features an arcade with a bunch of sport-themed interactive games.

A variety of bars keep the guests entertained and of course, they are modeled after what you find in New York. So, don’t be afraid to spend some time at the Irish Pub or at Coyote Ugly.

New York New York is home to Zumanity, the third show from Cirque du Soleil. It is the only Cirque du Soleil show to allow admission to audience age 18 and older. Also there are some excellent bars where you can listen to live music.

One of the main attractions at New York New York is the Roller Coaster, which travels through the property’s interior and exterior. Also, you can spend time at the Spa, get a makeover at the Salon, relax by the pool, go shopping or play golf.