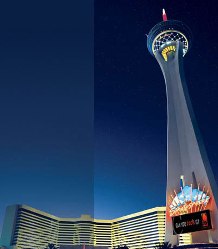 Stratosphere Las Vegas is a tower, hotel and casino located on the Strip. The signature attraction is the 1,149 feet (350 m) Stratosphere Tower, which is the tallest freestanding observation tower in the States (and second tallest in the Western Hemisphere).

Several golf courses are in close proximity of the property and so are the Red Rock Canyon National Conservation Area, Valley of Fire and Mt. Charleston.

In the early 1990s, the idea of building such a tower started to take shape. Initially, the builders wanted a tower to exceed the height of the CN Tower (which is the tallest in the Western Hemisphere) but because of the possible interference with nearby McCarran International Airport, the dimensions of the tower shrank until it was set at the current 1,149 ft (350 m).

Hotels/resorts near-by: located at the northern end of the Strip, the tower is close to Fremont Street. The closest resort to the tower is Sahara.

The 80,000 square-foot casino offers more than 50 table games, including Blackjack, Roulette and Craps, slots, video poker, an exciting poker room – with daily no limit tournaments – and a Race & Sports Book.

Stratosphere is one of the very affordable places to spend a vacation. Sure, the special offers (such as 30% off) definitely attract those looking for a bargain but even without the discount the rooms start at $50 per night (deluxe guestroom). A variety of special packages are also available (such as the 2 for 1 Breakfast Buffet Package). 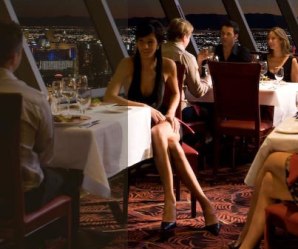 When you decide to dine at the Stratosphere, it’s not only the food that will take your breath away; it’s the location also. Their signature restaurant “Top of the World” situated 800 feet above ground level revolves 360 degrees to offer magnificent panoramic views. You can choose among six restaurants to satisfy your taste buds.

>>read more about the restaurants at Stratosphere Las Vegas

Stratosphere is home to some excellent lounges and bars. Air Bar, located at level 108, is the highest bar in Las Vegas.

>>read more about the nightlife at Stratosphere Las Vegas

>>read more about the entertainment at Stratosphere Las Vegas

You can also enjoy the resort’s pool or the exclusive beach club for guests 21 or older. Or you can choose to spend a day at the spa.

>>read more about the things to do at Stratosphere Las Vegas