Vegas Photo of the Week: Boardwalk Hotel and Casino 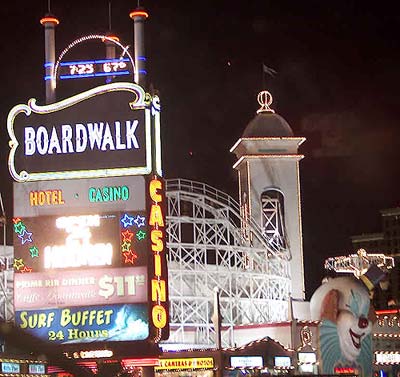 This shot of the Boardwalk Hotel and Casino was taken in 2004, roughly two years before it met its end.

The hotel, to me, symbolized all that was good and cheesy about lodging on the Strip, with its over-the-top theming of early 1900s Coney Island. Visitors to Vegas used to get frustrated that the rollercoaster didn’t actually work (unlike the one at New York-New York).

It was originally opened in the late 60s as a Holiday Inn and a six-story building of rooms was added in the early 70s.

In 1994, ownership changed hands, and so did the name, as the hotel acquired the Boardwalk moniker. Two years later, a sixteen story tower of rooms was added and in 1997, the hotel was bought by Mirage Resorts, and later became part of the MGM Mirage family during the merger of the two companies.

But at the time I took this shot, the Boardwalk was already sticking out like sore thumb on the Strip, surrounded by the Monte Carlo on one side and the Bellagio on the other.

On January 9, 2006, the Boardwalk Hotel and Casino was imploded to make way for the CityCenter project that is slated to open at the end of this year.

Here is a screencap of the hotel’s website the day after the implosion: 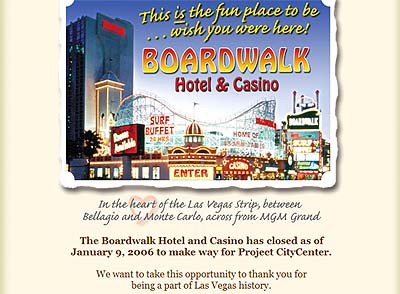 And here’s a great video of the actual implosion of the Boardwalk:

Do you have any memories of the Boardwalk Hotel? Feel free to share them in the comments.