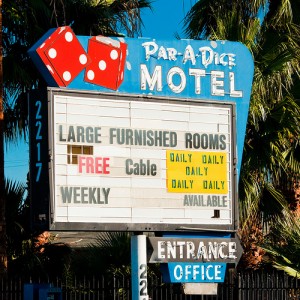 Motels have been part of the American landscape for over half a century, but they aren’t common in most other parts of the world, at least by that name. These smaller motor-hotels are usually located near major highways, and in most cases they have outdoor entrances so drivers can often park within close proximity to the door of their own room. Motels are almost always cheaper than a place calling itself a hotel in the same area.

Despite the heavy emphasis on hotels in Las Vegas, there are some motels located throughout the city. Don’t expect to find the glitz and glamor of the other accommodations available around Sin City, but if you just need a place to crash for the night, you may want to book a room in one of these simple lodging options.

Where to Find Las Vegas Motels

Back in the day, the Las Vegas Strip itself was dotted with motels between the major resort hotels, but in the past couple decades, the land along Las Vegas Boulevard has become so valuable that many of them have been bought out and plowed under. Many of the newest and biggest hotels in Las Vegas stand on property that was at least partially occupied by motels as recently as the 1990s.

But despair not because motels can still be found in several other areas of Las Vegas, including on most of the blocks right off the Strip in all directions. The greatest density of motels is along the slightly seedy part of Las Vegas Boulevard South between the Stratosphere, which marks the northern boundary of the Strip, and Fremont Street, which is known generally as downtown Las Vegas. However, if you travel any direction from the Strip, particularly east, there is no shortage of drive-up hotels calling themselves motels.

Where to Book a Las Vegas Motel

You can book most of the better motels through the same hotel booking engines that you’d use to search for Las Vegas hotels. Many of the more rundown motels rely only on phone reservations, and many also handle several drive-up inquiries. If a place doesn’t have computerized booking option at this point, chances are you don’t want to stay there if you have a choice.

You may also use the booking widgets at the top and bottom of this page to search for and book a motel.

Most of the motels in Las Vegas are standard chain offerings such as Motel 6 or Super 8. These motels conform to company standards of cleanliness and service, which are not far below that of most hotels. Privately owned motels range from clean and well cared for to quite run down. These older and more unpleasant accommodations are not particularly appealing, but they still fill up during the busiest seasons in Las Vegas. It’s also worth noting that motels almost never have casinos, so being able to steer clear of that scene is a selling point for some people.

Though prices at motels are generally lower than at the big hotels on the Strip, the nicer motels may charge quite a bit and still stay full. The fact of the matter is that you generally get what you pay for. In other words, if two neighboring motels charge radically different prices, it’s because one is much nicer than the other. Since it’s so easy for motorists to go next door, there isn’t much room for pricing games. If you are considering a Las Vegas motel due to budgetary concerns, make sure you check out room rates on Las Vegas Boulevard before booking as there are many hotels with rooms for less than $50.00 a night.

>>More information on how to visit Las Vegas on a budget.

Why Should I Stay at a Las Vegas Motel?

Because there are affordable accommodations in more appealing parts of Las Vegas, there are really only two reasons why anyone would want to stay at a motel:

The second of those reasons seems to be the way these motels stay in business. In particular, many people from Los Angeles make weekend trips into Las Vegas without a hotel booking. Once there, they discover that availability is extremely limited for some reason. In this case, spending $50.00 on a motel room in a convenient location suddenly seems reasonable compared to a $180.00 hotel room next door.

As stated earlier, there are several motels located around Las Vegas. These are a couple of the more popular options:

Motel 6 – Located on Fremont Street, this motel offers a restaurant on site. The popular Fremont Street Experience is only a short distance away.

Super 8 Motel – Located on Koval Lane, this motel is relatively close to the Las Vegas Strip. Attractions and facilities within close walking distance are the Sands Expo Convention Center, the Thomas and Mack Center and the Fashion Show Mall.

Use the widget above or below to find the best deals on Las Vegas hotels.