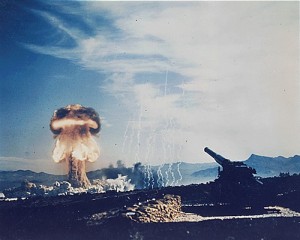 For the most part, Nevada consists of Las Vegas, Reno, Lake Tahoe … and then a whole lot of desert. This deserted land as well as favorable year-round weather conditions and mountainous barriers made this area of the United States particularly appealing for the U.S. Government, which established the Nevada Test Site—a place to test atomic weapons—in the 1950s.

There were 928 nuclear tests held at the Nevada Test Site from 1951-1992. Some of these were above ground, but many were held underground as well. Today the site is abandoned, but the Atomic Testing Museum chronicles the history of the atomic bomb and the culture and world events that happened alongside its development and demise.

The museum, which is an affiliate of the Smithsonian Institution, is divided into several sections, with an outlined order in which to visit it. Throughout the museum, visitors learn about the creation of the atomic bomb, radiation, pop culture trends that evolved from the creation of atomic energy and atomic research. There are also several artifacts of interest on display including safety equipment and copies of letters and documents that were important in the development of atomic energy in the United States.

One of the best parts of the museum is the film in the Ground Zero Museum. Visitors are first given the opportunity to feel and hear the shock wave from an atomic bomb, and then a short but interesting and informative about the Nevada Test Site follows.

One of the final sections of the museum offers a look at the future of atomic energy in the United States and around the world. Following that exhibit is the final area in the museum, which has several artifacts from major world events, including the falling of the Berlin Wall and the World Trade Center attacks in New York City.

Located off of the Las Vegas Strip, the Atomic Testing Museum feels compact, but the curators have organized an impressive amount of information into the allotted space so that it makes sense for those who don’t know anything about the subject matter.

Atomic energy can be a difficult concept to grasp, but the museum makes the subject relatively easy to understand for the average person. This isn’t the type of museum you necessarily want to take the kids to, and it doesn’t have the flash and glamour that much of Las Vegas has. It is an important part of Nevada’s history, though, so those who want to learn more about this aspect of the state will thoroughly enjoy this museum.