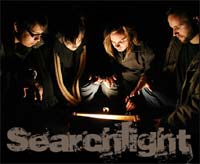 Local Vegas band Searchlight scored a coup earlier this year when their song “Contagious” was picked to appear on the soundtrack for the movie, Resident Evil: Extinction. Now you can see why this band is on the rise when they stop in at Zia Record Exchange tomorrow (Sept. 22) for a live performance.

The free performance starts at 1pm and afterwards, the band will sign copies of the movie soundtrack, or whatever else you bring.

Searchlight formed about two years ago and consists of Adam Michaels on guitar and vocals, Kevin Abdon on bass, Ricky Torres on drums and Matt Hopkins on guitar. The quartet say they wrote the song, “Contagious,” about the video game Resident Evil 4 and once producers of the film heard it, they immediately added the song to the movie soundtrack as one of its themes. If you want a preview of their set tomorrow, head over to myspace.com/searchlightmusic, where you can hear streaming audio of their music.

Zia Record Exchange is located at 4224 S. Eastern Ave #17, between Tropicana Ave and Flamingo Rd. The store has been a big supporter of the Vegas music scene, hosting free instore performances from local and national bands on a weekly basis. Visit their website for a list of upcoming events or check our daily Vegas Calendar.