It opened to a lot of fanfare on New Year’s Eve, but in less than nine months, The Palazzo already has its first nightlife casualty as the 40/40 Club Las Vegas shut its doors for good on Labor Day. 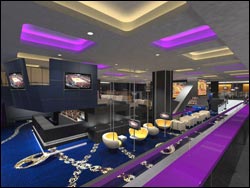 The sports lounge was the first west coast offshoot of rapper Jay-Z’s popular New York City nightclub, but after the mega-star blowout opening, had trouble finding an audience at the luxury hotel. It even shortened hours of operations and that still didn’t do the trick.

Still, it was a bit of a surprise when the following press statement went up on the club’s official website this week:

“Business mogul Shawn “JAY-Z” Carter and his partners have announced today the sale of the 40/40 Club in Las Vegas for an undisclosed amount.  The 24,000 square floor ultra sports bar and lounge located in The Palazzo and Casino, will not operate under the 40/40 brand, as the sale is for the lease and not the naming rights.”

Apparently the club is going ahead with plans to open in Chicago, Tokyo and Macau, which leads to further questions as to why they couldn’t make it work in Las Vegas. Was it just in the wrong hotel, or just not the type of club that draws the type of visitors who come to Vegas?

At any rate, it appears that the Las Vegas Sands Corporation, owners of The Palazzo and the neighboring Venetian, has taken back the space in the reported $44-million deal. They already have plans in place for the defunct club, with a majority of the space going towards the construction of a mega-sized race and sports book area. Rumors are the remaining footage may possibly be going towards another restaurant, as well.

In a press release, President and chief operating officer of the Palazzo, Rob Goldstein, said “By adding a complete gaming component to an already distinctive 24,000 square-foot space we will be able to create a very unique environment for our guests.”

Did any of you ever visit the 40/40 Club at The Palazzo? Tell us what you thought of it, or this recent closing, in comments.