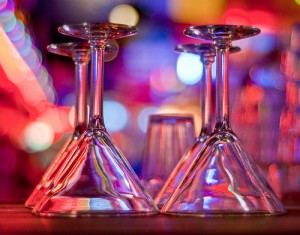 Live music, beautiful people and fancy cocktails … that pretty much sums up Blue Martini, a hot hub for Las Vegas nightlife. Though not locally owned, Blue Martini does have a local flair because of its location.

Located in Town Square, south of Mandalay Bay on Las Vegas Boulevard, Blue Martini isn’t really a place that many visitors from out of town happen upon, but it is particularly popular with locals, who pack it in seven days a week. Though known in part for its reputation as being a meat market for the singles in town, it is possible to enjoy the atmosphere as a couple. Seek out a table a little further away from the immediate action in order to avoid the wandering eyes.

Tucked on the second floor of one of the buildings in Town Square, Blue Martini invites guests with its swanky blue mood lighting and large performance area, all spread out throughout an impressively large space that overlooks the action on the sidewalks below. The live entertainment is a draw, with live music every night of the week, including country singers, karaoke, jazz and Latin rock. A DJ generally spins from midnight into the early hours of the morning.

Though these late night hours are when the action really starts pumping at Blue Martini, many other people prefer to stop by for its famous happy hour—voted best happy hour in Las Vegas by Las Vegas Weekly—where you’ll pay half off the entire menu from 4:00 p.m.-8:00 p.m. every day of the week.

This exceptional deal is even more appealing once you check out the menu at Blue Martini. The obvious draw is the martini menu, which encompasses several specialty martinis ranging from the fruity strawberry bliss and grape crush selections to more exotic and unusual choices such as almond joy, s’mores and cucumber. If martinis aren’t your style, there are also several champagne and wine selections.

Many people seek out Blue Martini to drink, but there is also a food menu for those who are looking for something to munch on as well. Light fare such as cheese and fruit plates, dips and bruschetta make up a good portion of the list, which makes sense considering all would pair nicely with a simple martini, but there are several more substantial offerings as well.