It was six months ago that Tangerine closed its doors at Treasure Island, leaving a nightlife void at the resort.

This week, Pure Management Group (PMG) and MGM Mirage announced the renovations are complete and they are ready to debut the newest addition to TI’s lineup: Christian Audigier The Nightclub. 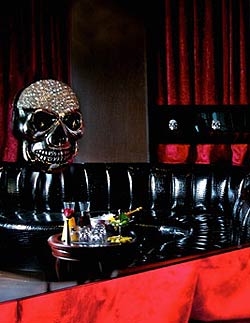 Audigier is well-known in the fashion world, having created rock’n’roll-influenced lines such as Ed Hardy, Smet, Crystal Rock and his own namesake line. The club, naturally, incorporates many of his trademark design elements, such as roses, skulls and crystals.

The inside of the club features red velvet walls, black glass chandeliers, skull-and-rose encrusted mirrors and black faux-crocodile leather banquettes. As if that weren’t enough, the centerpieces of the room are a black pebble stone bar with a red mirror bar top that features a one-of-a-kind fire effect and a pair of massive tanks filled with jellyfish.

VIP booths are on a new second level, overlooking the dance floor, and the expansive liquor list will include Audigier’s own line of wines and champagnes. The nightclub will also feature an outside patio offering patrons a view of The Strip, along with a nearby Ed Hardy clothing boutique for those that want to take the Audigier atmosphere home with them.

Speaking of clothes, staff at the club will be outfitted in specially designed creations by Audigier, who was very hands on with everything to do with the look and feel of the nightclub.

“I feel like I can do anything and this is just another facet of who I am,” says Audigier of his newest project with PMG. “I have so much to offer this world from what you wear to how you relax, party and enjoy life. This will be an extension of how I do it and everyone will be able to do it with me. Let’s party!”

July 4th is the opening date for Christian Audigier The Nightclub at TI. The designer, of course, will be there, along with actor/musician Nick Cannon, who will be acting as celebrity DJ. DJ Vice takes over the turntables on Saturday as the grand opening celebrations continue.

For readers of Las Vegas Logue, PMG is offering guest list access to bypass the main line, if you RSVP online and show up before 11pm. You still have to pay the cover charge, which is $30 for men and $20 for women, but at least you won’t have to wait in line long to get in.

Following the grand opening, Christian Audigier The Nightclub will be open Thursdays through Saturdays from 10pm until the early morning hours.

Given the nearby Social House’s ability to draw in a rocker clientel, it’ll be interesting to see how this new rock-style club does, since it’s so different from Tangerine. But since PMG has had major success with LAX, the club they opened last year at the Luxor, along with the flagship Pure at Caesars Palace, I’d bet on this new entry in the Vegas nightlife scene having a great start out of the gate.