Rapper Jay-Z took time out from last weekend’s MTV festivities to make some noise of his own. Holding a press conference, the music mogul announced that he has set plans in motion to open up a third location of his 40/40 Club in Las Vegas before the end of the year.

The popular sports bar and lounge will open at at the new Palazzo at the Venetian, located one level down from the main lobby entrance beneath the porte-cochere arrivals.

Plans are for the 24,000-sq-ft multi-level club to be blinged out with 85 plasma TV’s, 24kt gold and platinum floors, and five 40-foot bi-level bars. For the high-rollers, there will be five VIP rooms, and the nightclub will also offer an additional 3,000-sq-ft bar and lounge area on an outdoor terrace. Construction costs are estimated at $20 million. 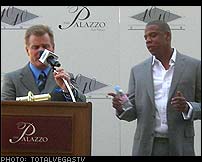 Jay-Z says he is also in negotiations with Nevada gaming authorities to open a sports book, either in his club or directly attached to, which would be a first for the chain.

Guests will be offered an extensive food and cigar menu, as well as an endless drink menu which runs from signature drinks like the club’s namesake 40/40 (Absolut Vanilla & Godiva White Chocolate Liqueur) to top shelf liquor and champagnes.

The 40/40 Club will open with a star-studded invite-only party on December 21st of this year, followed by the grand opening for the public the next day.

Jay-Z says he then plans to hold an insanely huge New Year’s Eve bash at his club, which he and Beyonce will attend. Tickets start at $200 for general admittance, and $700 for a booth for two, all the way up to $3500 for a booth for ten.

The 40/40 Club offers two level of memberships, which include VIP room access, VIP access entry (which is termed as “no waiting in line, under any circumstance”) and more to all of the clubs. The Purple is $1500 and the Gold is $800, both of which can be a great deal for those planning to visit the club often.