Sugarcane Opens at The Palazzo

Last week we mentioned the restaurant SushiSamba had opened at The Palazzo. This weekend, its companion lounge area had its grand opening.

Sugarcane, as the nightclub has been dubbed, debuted on Friday and is the first West Coast location for SushiSamba’s late night offerings. A dark corridor from the restaurant leads guests to the 4,000-sq-ft venue, which looks like no other club in town that I’ve seen.

The stage, dance floor and DJ booth are made of bamboo, as well as smoked and frosted acrylic, resin and paper. Seating in the club consists gold and chocolate brown leather-covered wenge wood banquettes. But the focal factor that truly makes the club unique are the plethora of custom-made simulated amber “sugarcanes” that drop down from the ceiling, containing moving lights that wind through the tubes and rods.

The lounge also sports artwork by Brazilian graffiti artist Felipe Yung, whose signature characters such as “Flipitos” (little ones) and “Jaguncos” (giants with small heads) also appear in the SushiSamba decor, tying the two areas together even further.

In addition to the main areas of the club, there is s 20 seat VIP area with plush seating and Brazilian Favela street finds decorating the area located behind the bar and sectioned off behind a mock-barricade of broken-down walls and fencing.

And just as SushiSamba melds the culinary worlds of Brazil, Peru and Japan, so does Sugarcane with its drink menu, which includes classics such as the Caipirinha (the national drink of Brazil), Peru’s frothy and famed Pisco Sour and variations of Japanese Chu-His. But why stop there? Try one of Sugarcane’s signature drinks like the Parisian Geisha (vodka, sake, mint and lemongrass), the Figo (Montecristo spiced wine, fig liquor, pear juice and lime) and the Bushido or “Soul of Japan” (shochu, plum sake, muddled plum and daikon beer float). 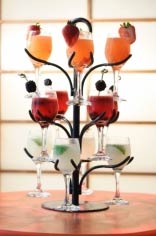 Can’t decide? Then you’ll want the club’s innovative “Cocktail Tree”, which offers 12 different drinks (four samples of three different drinks) served in shot glasses positioned within the branches of a wrought-iron “tree” – makes bottle service look almost boring, eh? It will set you back $70, though for twelve drinks, it’s actually quite a bargain.

In addition to a regular rotation of resident DJs, spinning a range from house to Top 40 to Brazilian and Japanese pop, expect Sugarcane to play host to a number of special events and performances. On select nights, you’ll be able to enjoy everything from capoeira (a Brazilian dance that incorporates martial arts) to samba dancers to geishas and Japanese taiko drummers.

The club will also start a weekly Wednesday industry night promotion in September called “Sugarbeats,” which will feature a variety of DJs in partnership with nightlife guru Marc Jay.

“The experience at Sugarcane will be unlike any other in Las Vegas,” says Todd Rubin, general manager of the club. “Samba dancers, geishas, distinctive cocktails and over-the-top interior design will ensure that this interactive nightlife experience fulfills its promise for stylish entertainment.”

Sugarcane is located next to SushiSamba at The Shoppes at The Palazzo, and is open Wedneday from 10pm until 4am and Thursday through Saturday from 11pm until 4am. There is no cover charge, which is very rare in Vegas, but they are imposing a dress code (typically, no baseball caps, shorts, etc – try to dress up if you’re going to be there).  Table reservations can be made by emailing tables@sushisamba.com.

Have you been there yet? Let us know what you thought of it.