McFadden’s Opens at the Rio With Grand Blowout This Weekend

A new party bar has opened at the Rio called McFadden’s Saloon. The Irish pub already has several locations nationwide, such as New York City, Boston, Nashville and Chicago, and they have become popular party spots due to it’s anything goes attitude. 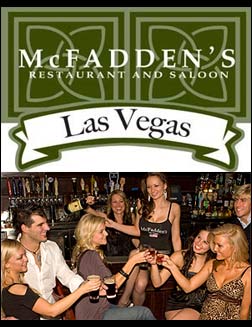 The Vegas location replaces the Rio’s former Irish-themed pub, the Tilted Kilt, and boasts 7,000-sq-ft of party space split into two rooms that include over 20 hi-def plasma TVs, a dance floor and a 100-foot long mahogany bar that is reinforced for those inclined to dance on it. Nightly entertainment will come courtesy of either dueling pianos or a live DJ.

For those arriving hungry, the menu features everything from boneless Buffalo wings to Irish Stew to Shepherd’s Pie topped with air-whipped potatoes. All of which can be washed down with over a dozen beers (many on tap) or one of their 90 oz fishbowl cocktails.

The official grand opening celebration is set to take place January 24th, with an open bar from 9-10pm. Friday, the 25th, Area 108 and SpyOnVegas team up for open bar from 6-9pm with complimentary Guinness and Miller beer, followed by a beauty competition to pick women for the pub’s upcoming calendar. The grand opening weekend wraps up on January 26th when actor Kevin Dillion of the HBO hit series “Entourage” shows up to judge the finalists for McFadden’s Calendar Girl competition.

McFadden’s is open seven days a week from 11am until, as they put it, “Erin goes bragh,” which near as I can tell, is about 4am. For more information, call 702.777.2463 or visit www.mcfaddensvegas.com.

First it was scheduled to close in August, then it got a stay of execution when the nearby Light closed to make room for the new Bank nightclub. But TI’s Tangerine nightclub has finally closed for its planned renovations, following a New Year’s Eve blowout with K-Fed.

As reported earlier, Pure Management Group hasn’t released any definite plans to the public, but inside sources have hinted the club will lose it’s current theme in favor of an Asian-inspired motif to complement the popular Social House restaurant, which PMG also owns at the resort.

No word on when the new club will open, but as soon as I get more details, I’ll pass them along.

According to a report in the Review-Journal, the long banned alcohol absinthe is now legal and making a comeback in certain Vegas clubs and restaurants. 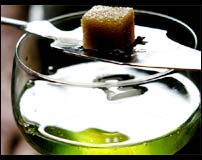 The alcohol, made from wormwood, was originally banned in 1912 due to its reported hallucinogenic properties, but it is now heavily regulated so the amount of the wormwood in any bottle is nowhere near the amount needed for it to produce psychedelic effects. It’s long been a favorite in Europe and amongst stars like actor Johnny Depp and rocker Marilyn Manson, mostly due to its presentation, which requires distilled water to be dripped over a sugar cube into a glass with about an ounce of absinthe. The final concoction releases the full flavor of the alcohol, while also rendering it less bitter.

Clubs currently serving absinthe include the Luxor’s Lucidity lounge, which only serves it via bottle service, along with the Wynn’s Blush and Tryst lounges. Several restaurants are now also serving the liquor by the glass, including Louis’s Las Vegas at the new Town Square center on South Las Vegas Blvd, which offers it for only $14, including the elaborate presentation.

No word if any green fairies have been seen around town, though…at least none caused by drinking absinthe.