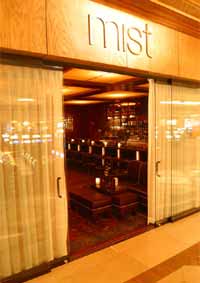 After seven years at Treasure Island, Mist will be closing next Sunday, November 1, 2009.

This intimate bar and lounge was a favorite among visitors to the hotel but for undisclosed reasons, it is shutting down for good as of the end of this month. No word on what is replacing it, either. The space is too small for the long-rumored reopening of Gilley’s, a pet project of TI owner Phil Ruffin. Maybe another lounge/club venue that’s owned by TI and not a third-party company? That’s what happened when Asian restaurant Social House closed and was replaced by Khotan.

At any rate, the news comes suddenly, and it was only an email flyer that clued me into the pending closure.

Looks like this season is a good one for the opening of celebrity-owned rock clubs.

The name comes from the famous poker hand, and the venue will feature both live bands and DJs. Cantrell and Ian say they plan to join the house band from time to time to play covers with their friends, and expect to book touring and local bands on a regular basis.

“We want this to be a place that we would want to hang out in,” Ian said in the official press release. “There’s a huge segment of the music audience that likes to go out but doesn’t want to go to places that only play Lil’ Wayne and Lady Gaga and charge $750 for a bottle of vodka. We want to be the opposite of that.”

Among the bar’s signature drinks will be the Dead Man’s Hand (whiskey and spicy ginger ale) and the late Pantera guitarist Dimebag Darrell’s favorite beverage, the Black Tooth Grin (Crown Royal with a splash of Coca-Cola).

The 200-capacity club is located at 3525 W. Russell Rd, inside the new nightlife complex Playground, and will hold its first event on November 7, a party for Bluff Magazine that coincides with the WSOP final table on November 9.