The Light Group has formally taken over management of the Beatles Revolution Lounge at The Mirage. 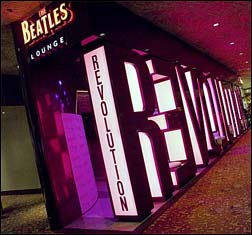 The club had formerly operated under joint-management from Cirque du Soleil and MGM Mirage, and had opened as a companion club to the Cirque show LOVE that is also hosted at the resort.

Other than a new round of resident DJ’s and some minor touches, the lounge isn’t undergoing any major changes for the time being.

Hours of operation are 6pm to 4am nightly, except for being dark on Tuesdays. A list of upcoming DJ’s and events can be found online.

The Light Group also manages high profile clubs at other MGM Mirage properties like The Bank at Bellagio and Jet at The Mirage.

Insider sources are telling me Ivan Kane’s Forty Deuce will close its doors at Mandalay Bay by the end of the month.

Despite rave reviews for the burlesque-themed nightclub, the economy is being cited for lack of attendance and declining revenue. For the time being, rumors are the dancers and band will take to the road, performing in other southwest US casinos and resorts, but they aren’t ruling out a return to Vegas in the future. Kane will also maintain his Los Angeles outpost of the club.

I’m told Mandalay may already have a replacement lounge in the works for the soon to be vacated spot that will be open by late summer or early fall 2009.