Vegas Pool Parties Get Underway For 2008

Nothing says it’s springtime in Las Vegas like the pool party and the 2008 season has officially gotten underway this month. Here’s a look at the various top spots to party in the sun this year – just be sure to bring lots of money and sunscreen: 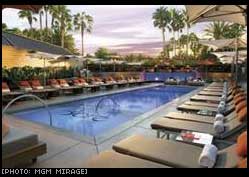 Bare at the Mirage opened a few weeks ago for its second season. With two dipping pools, the property offers European-style sun bathing, DJs, private daybeds and cabanas, and a raised VIP section. New for 2008 is a glass cover that can turn the pool area into a see-through dance floor. For the month of April, Bare will be open Thursdays through Mondays from 11am until 7pm. From May 1st on, it will be open seven days a week with the same hours. Admission for Friday, Saturday and Sunday is $20 for women and $40 for men. All other days are $10 for women and $30 for men. Guests must be 21 or older.

Ditch Fridays, the popular pool party at the Palms, opens its third season on May 2nd. Hosted by resident DJ Skribble of MTV fame, the parties feature live performances, fashion shows, prize giveaways and more. The event runs every Friday from noon until 7pm and cover is free for ladies and $20 for men.

One of the original old guards of the Vegas pool scene, Rehab at the Hard Rock opens its fifth season on April 27th and runs every Sunday through the season from 11am until 7pm. New for this year are more cabanas and an enhanced sound system. Cover is $30 for men, $20 for out-of-state women, $15 for local women and free for hotel guests with room key (up to 4 guests per room). The hotel will also bring back its Monday “Relax” pool party for a second year beginning April 28th, as well as the “Friday Night Live” concert series starting May 2nd with Puddle of Mudd.

Red Rock Resort’s Backyard will play host to a summer poolside concert series that kicks off on April 25th with Grammy Award-winning musician Kanye West with special guests Lupe Fiasco and N.E.R.D. (general admission tickets are $70). Other artists appearing throughout the season include Dierks Bentley with Bucky Covington on May 2nd (tickets – $45), and Crosby Stills & Nash on June 20th (tickets – $60). The resort will also begin season two of the Red Rock Retreat pool party starting May 5th that will feature tunes spun by new resident DJ Jack Lafleur, and soon after it will begin new Reggae Wednesdays and Sunday Night Live concerts poolside at Cherry. 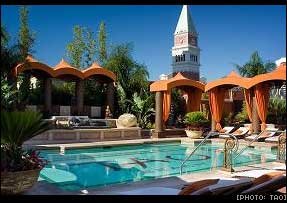 TAO Beach is currently open for regular daily service but it will open its second season of its Sunset Sessions on Sunday, April 20th at The Venetian. DJ Graham Funke and Chris Garcia will be spinning from 10am until sunset. New for 2008 is the Good Fridays promotion that kicks off April 18th, with DJs spinning from 10am until 10pm and a bikini fashion show every week. In addition to cabanas featuring hi-definition plasma TVs and poolside spa services, guests can now have meals delivered from the menu at TAO Asian Bistro as they lounge in the sun. The pool area is open daily from 10am until 5:30pm, with later hours on weekend evenings to serve as an extension of TAO Nightclub. Admission charge varies, but usually runs between $20 and $30 per person.

Venus Pool Club at Caesars Palace is now open seven days a week from 9am until 6pm. It offers European-style sun bathing, private cabanas, DJs and poolside food and drink service. It is complimentary for hotel guests, except on Saturdays when there is a $20 cover per guest.

Wet Republic is the newest adult water playground and though MGM Grand hasn’t offered up any photos yet, from all reports, it seems they went all out in the creation of this new pool area. Billing it as the Strip’s first “ultra-pool,” the resort has built this new party oasis of eight separate pools and spas, featuring two saltwater pools, adjacent to the main pool area. Intertwined with the pools is a 2,500-sq-ft open air ultra lounge where DJs will spin daily, and a 4,100-sq-ft sundeck that will transform into a stage to spotlight weekly and monthly events, including international DJ guests and live concerts. Eight state-of-the-art underwater speakers in the pools and six cascading waterfalls will lend to the South Beach party ambiance. MGM Grand has set a mid-April opening for the Wet Republic pool area which will also feature a direct valet access so guests don’t have to walk through the casino in their bathing suits.