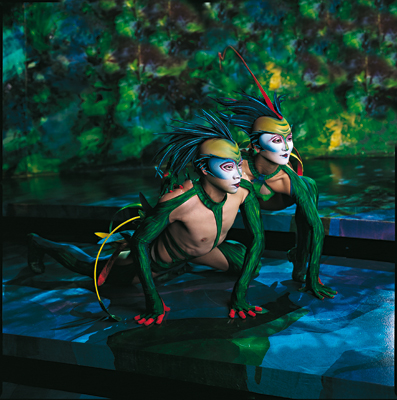 Though Las Vegas was originally known for its gambling, over the years the city has become known for other reasons, one of which is the incredible array of shows.

Most of the resorts in Las Vegas have permanent productions in place, which range from musicians and magicians to Broadway musicals and burlesque strip shows. Whether you’re in town with the family or in Sin City for a bachelorette party, there is definitely something that will suit your taste.

With so many options to choose from, the question isn’t whether there will be something you want to see but which show to pick from the many options available.

One of the best things about the shows in Las Vegas is the variety of options. Some have been around for many years, such as Jubilee!, a classic Las Vegas showgirl performance, while others stick around for only a couple months. Some rely on lavish costumes and spectacular sets to capture the “wow” factor while others consist of only one or two performers who carry the entire performance on their shoulders.

The large production shows, such as The Lion King and Phantom – The Las Vegas Spectacular, are popular crowd favorites and tend to be both the most expensive and fastest selling shows. Magic shows are also particularly popular, as are magic shows that have some element of comedy included in them. Penn & Teller is arguably the most popular magic show in Las Vegas. Tribute shows and impersonations are also particularly popular, though not as pricey as the larger-scale shows.

Las Vegas is, of course, a playground for adults, and there’s no shortage of adult-only shows. These range from the suggestive Cirque du Soleil show Zumanity to the vampire-themed Bite.

Of course there are plenty of family-friendly options as well. Some of the magic shows are certainly tame enough for kids as are a few of the Cirque du Soleil shows. The Tournament of Kings at Excalibur seems like it was created with children in mind.

Many of the theaters are built with high-quality experiences in mind and rarely is there a bad seat in the house. Some theaters are larger than others, but most provide a relatively intimate experience with the performers.

Because many Las Vegas shows are permanent fixtures, the theaters in which they take place were designed and are modeled specifically for a particularly show. The theater for KA at MGM Grand has platforms and swings, not to mention a tilting stage, which were created with this show in mind. Similarly, the water-themed shows Le Reve and Cirque du Soleil’s O both require specialty theaters.

When you buy show tickets, you’ll likely be able to choose where you want to sit. Choose a seat somewhere in the middle of the theater, at least a few rows back from the stage. Though all seats are, for the most part, fairly decent, this provides the best viewing opportunity.

Las Vegas show tickets are fairly easy to secure several months in advance if you know what show you’d like to see. Online sites like this one allow you to search by show or narrow down a date range. You can also buy show tickets directly through the resorts.

Ticket prices vary wildly, depending on the popularity, complexity and size of the show as well as the exclusivity of the resort in which it is held. Expect to pay anywhere from $60.00-$200.00 per ticket, though some shows are slightly less expensive and others are more expensive. Most shows are on five days a week with two days that are black so performers can take some time off. In addition, many are off for a few weeks each year. If there is a particular show you’d like to see, make sure you look for show times well in advance to ensure there is a performance taking place while you are in Las Vegas.

Though you’ll probably have to pay full price for tickets to the most popular shows, there are several coupons and discounts for other shows throughout the year. If you don’t mind taking a chance on which show you see, it may be worth waiting until the day of to purchase tickets. At that point in time, the main goal is simply to fill seats, so it is possible to snag tickets at a severely discounted price.

>>More information on how to buy Las Vegas show tickets.