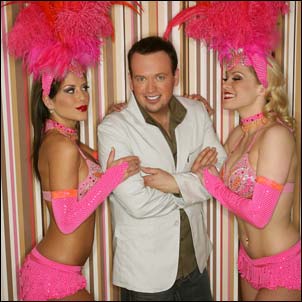 Comedic magician Nathan Burton is having a great summer, career-wise.

Not only has he made his second appearance in the reality-TV competition series “America’s Got Talent,” but this week, it was announced that the Flamingo has signed him to a three-year multi-million dollar headlining deal.

Burton had been performing at the V Theater at the Aladdin Hotel & Casino in various shows for several years when he moved up the Strip to the Flamingo. His show, “Nathan Burton Comedy Magic” opened in the main showroom at the hotel in April 2008, where he’s been been performing since.

Meanwhile, just down the street, comedy hypnotist Anthony Cools has been signed to a four year extension of his contract at Paris, which will keep his show at the resort until 2013.

The Las Vegas Advisor also reports there is a new opening to the hypnotist’s show, which involves a 3-D movie.

Due to the strong sexual content of Cools’ show, all ticket holders must be 18 or over.