Tonight was to be the opening night of music icon Barry Manilow’s new show at Paris Las Vegas on the Strip. Unfortunately, tonight’s 7:30pm performance has had to be postponed by one day. 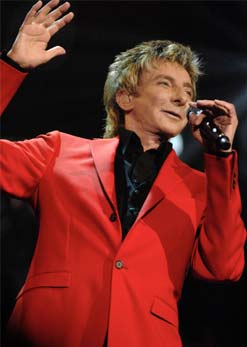 According to a press release by the resort, an unexpected power surge occurred this afternoon around 2pm. The surge left some of the sow’s theatrical and musical instruments “temporarily disabled.”

Those who wish to attend the rescheduled performance need do nothing but show up with their tickets for tonight’s performance and will be sat in the same seats.

Ticketholders who would like to obtain an exchange or refund should contact the Paris Théâtre Box Office or, if the tickets were purchased through Ticketmaster, call Ticketmaster at 800-745-3000.

Manilow previously performed his hit Vegas show over at the Las Vegas Hilton for five years, until the contract expired in December 2009. He then decided to move to a Strip location at Paris Las Vegas, where he not only has a new theatre set-up, but a new stage show, as well.

Besides this weekend, currently announced show dates include:

The weekend of July 9-11, 2010, will also be when the Barry Manilow International Fan Club Convention takes place at Paris Las Vegas.