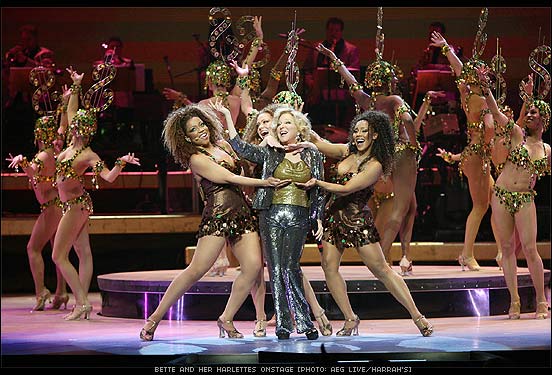 Last night (Feb 20), Bette Midler officially opened her new run as headliner at Caesars Palace and it was an celeb-studded evening full of rave reviews.

Flaunting plenty of gags, and a wealth of hits, Midler’s “The Showgirl Must Go On” extravaganza features some of the singer’s favorite characters, from the wheelchair-bound mermaid Delores Delago to Soph, the oldest living showgirl in Vegas, all set against a backdrop that resembles a Broadway-style theater. And there is plenty of glitz and glam in everything from the set to the Divine Miss M herself.

“I’ve been hoarding feathers and fans and sequins and rhinestones for the last 50 years and, hey, I’m throwing ’em all on stage,” she joked.

She is joined onstage by a trio of backup singers (Jordan Ballard, Kyra Dacosta and Kamilah Martin) known as the Harlettes, a 13-piece band-— which includes a six-piece horn section from the Las Vegas band “The Fat City Horns” — and 20 female dancers, who tackle the lively and energetic choreography created by the legendary Toni Basil (of “Mickey” fame).

On hand to take in the first night of was a crowd that included N’SYNC’s Lance Bass & Joey Fatone, Taye Diggs, Christine Ebersole, Jennifer Coolidge, Nathan Burton, Ricki Lake, Idina Menzel, Siegfried & Roy, Rita Rudner, Meatloaf, Toni Basil, and Alan Thicke. Post-show, Midler and her daughter Sophie stolled through the lobby (with bodyguards, of course) to cheers from those on the gambling floor to Pure Nightclub, which had some excitement of its own earlier in the day. At Pure, the Divine Miss M and her closest friends continued the grand opening celebrations until the wee hours.

Here’s a quick round-up of some of the exceptional coverage of the evening around the web.

So it’s now official…Caesars Palace is now the only place on the Strip where you can not only make a bet, but also enjoy a night of Bette, all in the same place.Tickets for “The Showgirl Must Go On” are on sale now and can be purchased by calling 1.877.7BETTEM (723-8836) or logging on to www.ticketmaster.com, keyword “Bette Midler”. Tickets may also be purchased in person at The Colosseum at Caesars Palace Box Office, which is open daily from 10am to 10pm. Ticket prices are $95, $140, $175, and $250.

Bette Midler will perform her show five nights per week at 7:30pm, with the show dark on Mondays and Thursdays. Whe she takes longer breaks, the stage time will be split between Elton John and newly signed Cher, who is readying her first show for Caesars Palace, starting May 6.