If you’ve ever seen a Cirque du Soleil show, you know the performers take great risks with the tricks and stunts they do onstage. And while the company takes care to make sure its casts are safe, mistakes and accidents can happen. 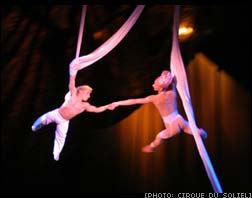 Tuesday night (Nov. 13), during the 7:30pm showing of Zumanity at New York-New York, two performers were seriously injured during an aerial act that went horribly wrong.

The performance, called Aerial Silk, included long billowy streams of fabric that the artists wound around their bodies high in the air. The female performer reportedly lost her grip on the drape and plummeted about twenty to twenty-five feet to the hard stage below. During her fall, she knocked her male partner off his drape, and he, too, fell about fifteen to twenty feet. Both hit the stage with force, according to witnesses, who say both bounced before coming to a rest onstage.

The male, Alan Silva, was treated for minor injuries and released, but his partner, whose name Cirque is withholding, is still in the hospital, though as of today, her condition is stable.

Witnesses say Cirque du Soleil staff, including a physical trainer and those with paramedic training, rushed immediately to the rescue of the performers, but it still shocked members of the audience so badly that some in the front row fainted and about half left before the show finished. Cirque has given guests at the performance a full refund for their tickets.

This is the second time an injury has occurred during the stunt, with two performers falling during a rehersal about a year and a half ago.

While the company investigates what caused the tragic accident, the eight minute section of the aerial performance has been completely removed from the show.

Our best wishes go out to the injured performers for a speedy and full recovery.