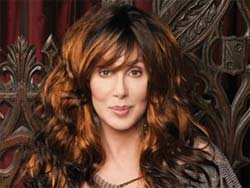 This week, AEG, producers of her Vegas show, issued a statement that because of asthma-related bronchitis, the legendary singer is canceling all remaining shows at The Colosseum for 2008.

Blaming the combination of dry desert air and extreme air conditioning within the hotels, also known as “Vegas Throat,” Cher says the illness has forced her to cancel the shows, but that she looks forward to new shows at the beginning of next year.

For those holding tickets to any 2008 canceled show, the following options exist:

Cher began headlining the 4,100-seat Colosseum in Caesars Palace in May 2008 for what was to be approximately 200 shows over three years. The 90-minute show was to be presented four nights a week through 2011.

According to Caesars Palace, no new show dates have been slated yet for 2009.