Though a lot of the adult-themed entertainment in town seems geared towards men, there are still plenty of options for women (and gay men) and among the hottest is The Chippendales at the Rio. 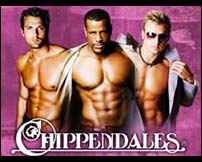 2007 marks the fifth anniversary of the male revue in Las Vegas, and next Saturday, October 6th, the Chippendales hits another milestone as the group performs their 2000th show.

Want more numbers? I’m told that each year, the men bench press more than 3,300 pounds in the gym, discard 57,408 garments during their performances and bring more than 5,200 girls on stage to be a part of the show.

The show has also been attracting major media attention this year, with television shows such as “The Insider” and “Inside Edition” featuring stories on the Chippendales in Vegas.