Cirque du Soleil has finally named its newest show that will debut at CityCenter next month.

The Elvis-themed show will be called Viva ELVIS, and like LOVE did with The Beatles, will integrate the music of Elvis Presley with the theatrical acrobatics of Cirque du Soleil. However, this production will differ from LOVE in that it will also incorporate acting and actual dialog to help tell the story of Presley’s life. 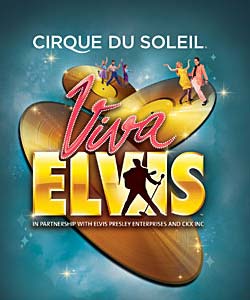 The show opens in previews starting December 18, 2009. Dates are as follows for the preview window:

For the December previews, showtimes are 7pm, with the the exception of the addition of a 10pm show on December 28 and 29, and a 4pm matinee show on New Year’s Eve. In January, there are additional 10pm shows on the 1st through 3rd, and a 9:30pm second show the 18th through 26th.

Regular Viva ELVIS shows begin on January 28, with performances at 7pm and 9:30pm on Fridays through Tuesdays. The show looks to be dark on Wednesdays and Thursdays.

Tickets for shows through February, including the previews, go on sale to the general public December 15, 2009 at 8am. However, if you’re a member of Cirque’s free “Cirque Club” fan club, you can buy tickets now to see Viva ELVIS.

In the meantime, Cirque du Soleil has released this five minute mini-documentary on the creation of the Viva ELVIS show that features interviews with key members of the creative team, along with footage of rehearsals of the show.