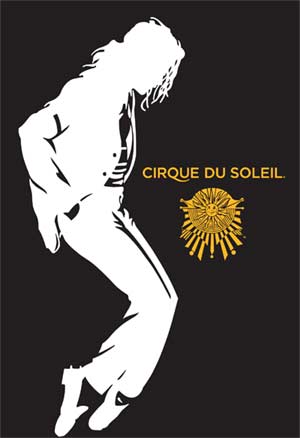 Prior to his passing, pop music icon Michael Jackson never made a secret of his love for Cirque du Soleil. He was even supposedly in talks to do something with Cirque and his music. Alas, during his lifetime, he never got to see that to fruition.

This week, however, Cirque du Soleil announced that it has reached an agreement with The Estate of Michael Jackson to produce not one, but two shows featuring Jackson’s music.

The first collaboration will be a touring show, in the vein of an arena concert. In fact, from the press release sent out by Cirque du Soleil, the show will even utilize technology that was originally conceived for use in Jackson’s “This Is It” London shows that he had been rehearsing for at the time of his death.

The show will open in late 2011 with a two-week residency in Cirque’s hometown of Montreal, Quebec, Canada, before moving to Las Vegas for an as-yet-to-be-determined multi-week length run at the Mandalay Bay Events Center.

The second collaboration between Cirque and the Estate of Michael Jackson will be a permanent residency show in conjunction with MGM Mirage. The resort it will be at hasn’t been revealed yet, but Vegas celebrity journalist Robin Leach twittered earlier today that sources have reportedly told him no current productions will close to make way for this new show. That rules out this show taking the place of Criss Angel show at the Luxor. And I can’t see this show happening at Excalibur.

I’m guessing this second show will find a home at Mandalay Bay, which should have the room for a specially constructed theater to be built for this new show. If you’re counting, this would be Cirque’s eighth show in Las Vegas.

The permanent residency show is slated for a late 2012 opening, along with a companion nightclub. No word has been given as to the artistic direction of this second show, but judging from the promotional video Cirque has released, I would think it might be in the direction they took with the Beatles and Elvis shows. Take the music and use it to tell a story, perhaps one of Jackson’s rise to fame as the King of Pop. One thing is for sure – both Cirque and Jackson’s estate are adamant there be no Jackson impersonators in this or the touring show.

Whether you’re a fan of Jackson or not, news of these shows is a good thing, not just for Cirque du Soleil, The Estate of Michael Jackson and MGM Mirage, but for Vegas in general.

Since his passing almost a year ago, Jackson’s fans have eagerly snapped up merchandise and supported projects, like the “This Is It” concert film, that bear his name. To have not one, but two Jackson-Cirque collaborations in Vegas means these fans will make the pilgrimage to town. That means more money for the local economy and more jobs to look forward to. These fans will need places to sleep, eat and play when not at the shows.

What do you think? Would you go to see one or perhaps both of these shows? Would you make a special trip to Vegas just to do so?