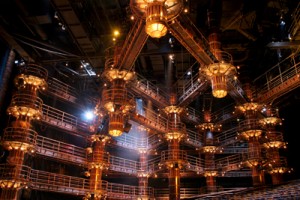 Many of Cirque du Soleil’s shows emphasize the circus component of the performances, with dazzling acrobatics, stunning strong men, aerial acts and jaw-dropping contortionists, all suited in bright costumes and set to interesting music. KA, a permanent show at MGM Grand, is a different kind of Cirque show, mainly because it has a very distinct plot and the storyline is the main emphasis while the typical performance aspects act as a vehicle to tell the story.

The KA experience starts when you step into the theater, which has been built specifically for this show. An impressively massive stage (which tips, tilts and becomes a number of different backdrops during the performance) is flanked by pillars and platforms set around the theater. Warrior-like characters appear from these platforms, swinging across the audience as part of the show, and through the audience, making the performance a truly three-dimensional experience.

KA’s story is about two siblings who are separated and must overcome great obstacles to be reunited. While they sail across oceans, wander through jungles and avoid battles, the twins meet enemies who foil their plans and allies who guide them. As the story progresses and the siblings make their way through these scenes, the classic Cirque acrobatics act as a backdrop. Among the more impressive scenes is one in which the stage tilts to nearly 90 degrees and the characters perform an act among the arrows being shot by warriors from the audience. A more subtle but equally as impressive scene is one in which one of the characters makes shadow puppets. These creative but not overbearing acts are what make KA awe-inspiring, beautiful and entertaining. 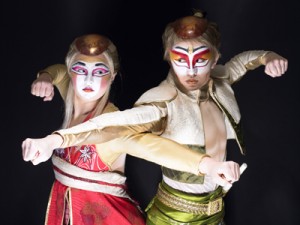 While KA is not as flashy as other Cirque du Soleil shows, expect to be swept away in the story while still being impressed with the classic Cirque elements embedded in the performance. Children must be five years or older to go to the show, and while anyone can appreciate the acrobatics onstage, those who are mature enough to follow the story will get the most out of KA. Beyond that, though, if you like the fantastical sense in films such as “Crouching Tiger, Hidden Dragon,” chances are you’ll enjoy the whimsical, magical and artistic performance of KA.

KA is shown Tuesday through Saturday at 7:00 p.m. and 9:30 p.m. Seats in the middle of the theater are best so that you can see the action happening on all sides. Ticket prices start at $69.00 per adult, but there are frequently discounts on tickets for KA, so check on current promotions before buying.