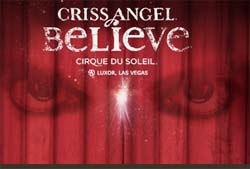 Doug Elfman of the Las Vegas Review-Journal says he interviewed people streaming out of the theater after last Friday and Saturday’s previews and many people hated it. Some were reportedly even asking for their money back. But it’s important to note that he himself did not see the show for review.

Richard Abowitz, of the LA Times Vegas blog “The Movable Buffet” says that while he knows it was just a preview, he did see the show on Friday and feels “this show has serious challenges that are impossible to ignore ahead of it.”

Several commentators over at Hotel Chatter also saw the show and were not that impressed..

Angel himself hasn’t commented yet, but his pr person did, reportedly contacting celeb gossiper Perez Hilton with a message stating, among other things, “Just because the reporter [Doug Elfman] chose not to find anyone that said anything positive, or rather did and didn’t use quotes from them, is no true indication of the direction that the show is headed…The show will be more than ready by Halloween night. I’d like to invite you personally to come see it, meet Criss and judge for yourself.”

It is important to reiterate that these are just previews of the show, which is when many productions work on fine tuning shows. Both Ka and Zumanity had mixed previews, too. and it’s quite possible by the time regular ticketed shows begin, Believe may be 100% different. But it’s not a good sign that the show still seems to need a lot of work to make ticket holders happy.

Have you seen any of the Believe previews? Let us know what you thought of it in comments.