With only five months until the opening of his new show, magician Criss Angel has revealed some pertinent details this week about his upcoming collaboration with Cirque du Soleil. 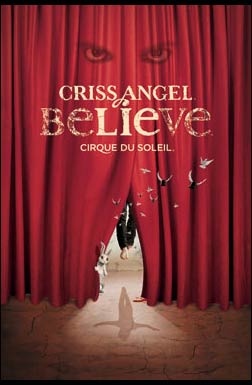 Housed in a custom-built theater at the Luxor, Angel has taken the name for his new show from a quote by the legendary Harry Houdini. The magician and escape artist reportedly told his wife on his deathbed, “After my death, many people will claim that they are still able to communicate with me. If their claims are valid, they will be able to tell you a code word — that word is BELIEVE.”

In an homage to Houdini, Angel has decided to name his new show, “Believe.”

He has also revealed the teaser poster for the new show, which can be seen to the right. Note the rabbit and doves, which signify the magic elements of the show. And while Angel is not seen beyond his eyes at the top of the poster and his feet sticking out from the parted curtain, the shadow on the floor is that of Angel in the typical cross position he stands in when doing his levitating illusion.

In his attempt to meld his illusions with the acrobatic prowess of Cirque du Soleil, Angel has written a story with show director Serge Denoncourt that centers around a Victorian Noble, played by Angel.

As the story weaves between reality and fantasy, Angel’s character encounters two women, Kayala and Crimson, along with four “bizarre” ushers and a high-energy troupe of Cirque characters and dancers who serve as both the backdrop and an integral part of Angel’s illusions during the show.

Angel’s illusions will be a major part of telling the story, rather than individual standalone elements, making this unlike anything he or Cirque du Soleil has done before.

Preview performances are scheduled to run September 1 through 11, 2008, with the gala premiere set for Friday, September 12th. Regular performances will then begin September 14, 2008 and run Friday through Tuesday nights, with the show dark on Wednesdays and Thursdays. There will be two shows nightly at 7pm and 10pm.

Tickets for “Believe” went on sale to Cirque Club members, Criss Angel Loyals and Luxor Insiders today (all three are free to join at their respective websites). Ticket prices are $150, $125, $99, $79, $59 plus tax. All preview performances will be discounted 25 percent, though these previews may be interrupted as necessary so adjustments can be made to the show based upon audience reaction.

I have to admit that I’m intrigued not only to see how Angel blends his magic and illusions with the fantasy world that Cirque du Soleil is known for creating, but to find out if Angel can keep up with such a busy schedule. Especially once one factors in his additional work on his TV series “Criss Angel: Mindfreak” on A&E, and his seemingly endless appearances at Vegas nightclubs.

How about you? Are any of you excited by this new pairing of Cirque du Soleil with Criss Angel? Let us know in the comments.

In the meantime, as an added bonus, Angel and Cirque have released a video of the illusionist talking about the upcoming show: