Donny & Marie Osmond began their headlining gig at the Flamingo earlier this month and it appears that the show is wowing crowds. Ticket sales are already among the tops for shows on the Vegas Strip, even despite the fact the show is mostly G-rated. Even the Las Vegas Sun gave them a glowing review. 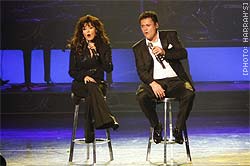 “The audience response to ‘Donny & Marie’ has been overwhelmingly positive,” said Don Marrandino, President of Flamingo Las Vegas in a press release. “Each night they perform to a packed showroom and receive standing ovation after standing ovation. Donny and Marie fans are coming from all over the country and all parts of the globe to see this show; they give people another reason to come to Las Vegas.”

Co-produced by Danny Gans and Chip Lightman, the legendary siblings perform a 90-minute show simply called Donny & Marie, that is very reminiscent of the duo’s popular 70s variety TV series. The Vegas version incorporates singing, dancing, comedy and more into a show that includes the two performing both together and separately from their hits catalog.

Together, the two perform songs like “It Takes Two,” “Morning Side of the Mountain” and “I’m A Little Bit Country, I’m a Little Bit Rock and Roll.” Separately, both perform solo hits sets. Marie’s consists of songs like “Paper Roses,” “Boogie Woogie Bugle Boy” and a Broadway medley including “All That Jazz,” “Life is a Cabaret” and “Phantom of the Opera.” Donny then rocks audiences with “Soldier of Love,” “Puppy Love,” and “Twelfth of Never,” and gives audiences a taste of his Broadway career with Andrew Lloyd Weber’s “Any Dream Will Do.”