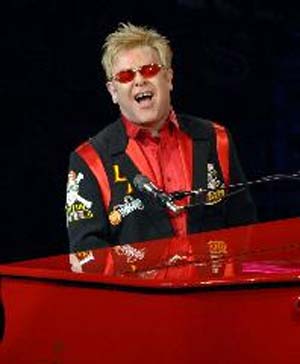 John first opened his popular hit Vegas show, “The Red Piano,” as a revolving headliner at The Colosseum on February 13, 2004, with what was supposed to be 75 dates over 18 months.

Due to public demand, the contract kept getting extended. Now after five years, and 241 shows, John has decided to end his incredibly successful run at Caesars Palace.

Both critics and audiences loved the wildly imaginative show from the start. Renowned photographer and director David LaChappelle served as the production designer and director for the show and created a visually stunning backdrop of videos and other bold images to accompany John’s incredible catalog of hit music that spans almost more than three decades.

Wearing red-tinted glasses, and a bright red shirt under a black and red jacket with “Captain Elton” on the sleeve and “Las Vegas Pirates” on its back, John started the last show with “Bennie and the Jets.”

“I really have enjoyed every single moment of this engagement,” he said as he finished the song.

He later went to joke about he and former artist-in-residence Celine Dion’s ending their shows, “Who are you going to get to fill in our shoes now? You’ve got Better Midler. You’ve got Cher. It’s gonna be the Village People next.”

It is possible he will return for rare weekend engagements in the future, but nothing has been mentioned at this point in time. He will however, be on tour this fall in North America with fellow piano man Billy Joel.

As he closed the show with “Your Song,” he said to the audience giving him an standing ovation, “One day I might even see you in Vegas, OK? But until then, I love you.”

The Las Vegas Sun has a wonderful slideshow of photos from the final performance.

For those that couldn’t make it, here’s a clip of Elton performing “Candle in the Wind” from his “Red Piano” TV special that aired last year: