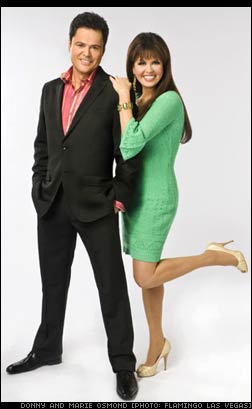 Starting September 9, 2008, the iconic siblings will take the stage for a revolving schedule of performances that call for them to be at the Flamingo for a total of 26 weeks within an eight month time span.

Judging by how fast their July shows at the MGM Grand sold out, the Flamingo has wisely placed their appearances so that the duo will be at the resort during most major holidays and convention periods, thereby maximizing ticket sales.

As part of the multi-talented Osmond family, Donny & Marie had a very popular self-titled variety show in the mid-70s. This translated into successful solo musical and acting careers for both of them. They each have also had thriving careers on Broadway and both of their autobiographical novels have reached #1 on the best seller lists.

Reunited once again onstage, this current contract represents the first time in 29 years that they have performed an extended residency engagement in Las Vegas.

Long-time Vegas performer Danny Gans and his business partner/manager Chip Lightman are presenting the show under their company GansLight Entertainment.

In a press statement, Gans explained his involvement with bringing the siblings to the Flamingo: “My version of a variety show has been what Vegas has known thus far. What we have now is a true variety show which conveys the real essence of America and the country’s love of homegrown talent. When you couple that element with the current Las Vegas entertainment landscape, we felt Donny and Marie provided the perfect combination and something that no one else was making available.”

The show will be a multi-media spectacle complete with dancers, multiple video screens and a custom designed stage. The show is targeted to run about 90 minutes and will feature their greatest hits, both together and as solo artists.