On Saturday, January 26th, Harrah’s attempted to break the Guinness World Record for “Most People in a Chorus Line” by featuring over 1,700 members of the famous Red Hat Society in a line that ran from Bill’s Gamblin’ Hall & Saloon all the way down to the Carnaval Court at Harrah’s. 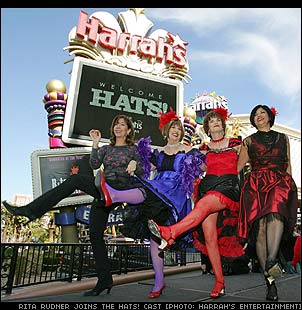 Harrah’s resident headliner Rita Rudner even joined in with the attempt, which looks like it was successful. The previous record was set in 2004, with 1,628 participants, and this week’s attempt, if verified by the Guinness Committee, would replace that.

The event was staged to promote HATS!, the newest show at Harrah’s. The musical comedy, which debuted at the resort on January 12th, chronicles one woman’s anxiety over her upcoming 50th birthday and how she learns to embrace the milestone event with the help and support of her friends.

The show is inspired by the “joys of sisterhood” lifestyle embraced by the Red Hat Society, a worldwide organization with over 30,000 chapters in all 50 states plus 25 countries. The music to HATS! is composed entirely by critically acclaimed Grammy®, Golden-Globe and Tony award-winning songwriters including Pam Tillis, Kathie Lee Gifford and Melissa Manchester.

Whoopi Goldberg, actress and co-host of the TV show “The View,” has praised the show, saying, “If you want to see something really magnificent, not just a great musical but a magnificent presence, go see HATS!”