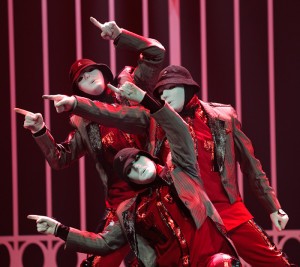 When they signed up to compete in the first season of America’s Best Dance Crew, the troupe known as the Jabbawockeez probably had no idea how popular they would become. Originally a seven-member dance team, the crew now consists of more than a dozen dancers and is the main stage production at Monte Carlo in Las Vegas. The show is officially called MUS.I.C. (pronounced “Muse I see”), but the boys behind it are affectionately known simply as the Jabbas.

Described in its marketing materials as an “audio-visual story of inspiration brought to life through the harmonization of sound and movement,” there is something about MUS.I.C. that makes it stand out from the others: Everyone on this dance crew wears a full face mask as well as white gloves, so you can’t tell the dancers apart from each other. Rumor has it that the reason they chose to wear these costumes is so audience members focus on them as a troupe, not on any single dancer. These masks also allow viewers to keep their eyes on what makes these boys such great dancers in the first place: Their feet. In addition to the elaborate and collaborative dance routines, there is a bit of comedy thrown in for good measure, which is especially impressive given the fact that there are no vocals in the show and facial expressions can’t be used to convey anything. (In fact, it reminded me just a bit of Blue Man Group in regard to its theatrical composition.)

If you have tickets to MUS.I.C., make sure you arrive well before curtain call, as the show starts before it is actually scheduled to begin. A single dancer wearing a janitor’s outfit wanders into the audience and begins bantering with the people sitting in the front of the theatre. This humorous interaction is entertaining and leads naturally into the start of the show, which officially begins when the janitor tries to plug in a giant speaker. From there the show takes off, weaving theatrical components, hip-hop dance, comedy and audience interaction.

Potential critics of MUS.I.C. might ask how these boys can keep up the high-energy dance routine (and keep it interesting) for nearly an hour and a half. Even though the dance skills displayed by the Jabbas are among the best in the city, the constantly changing themes, backdrops and music keep the show moving, though there is a point a little over halfway into the show when audience interest begins to wane. Luckily a journey through the history of song and dance brings it back to life as the crew performs to a variety of hits ranging from “Singing in the Rain” to fan favorites by Michael Jackson. Overall, though, MUS.I.C. is a fun and entertaining show that really is unlike most other shows you’ll find on the Las Vegas Strip.

Though the show is marketed for anyone over the age of five, there are a few adult themes in the show, and it might be best to hold off on taking the family until the kids are at least eight years old.

My ticket to MUS.I.C. was comped, but all opinions in this piece are my own.