Jersey Boys at The Palazzo 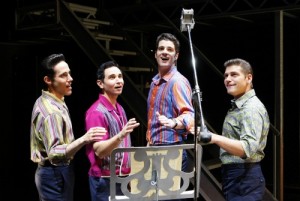 One of the most popular and highly acclaimed shows on the Las Vegas Strip is the Tony award-winning Jersey Boys. Originally performed on Broadway in New York City, this show has been in Las Vegas since May 3, 2008 (Frankie Valli’s 74th birthday!), and it continues to sell out on a fairly consistent basis.

The show follows the history of the band, The Four Seasons, from inception in the 1950s to the present day. The brainchild of Tommy DeVito, The Four Seasons were, at one point, just another New Jersey band trying to make ends meet in local bars. With the addition of Frankie Valli, the group’s main singer and the face of the band, things began to change: They were on The Ed Sullivan Show, new members joined (most notably Bob Gauido) and DeVito started falling into financial troubles, forcing the band to make difficult decisions about how to help him (and the band) get back on track.

Throughout the tumultuous years that The Four Seasons were front and center, the band rolled through musical hit after hit. Their most popular songs—”Sherry,” “Big Girls Don’t Cry,” “Can’t Take My Eyes Off of You,” “Oh, What a Night” and others—climbed to the top of the charts one right after another.

Jersey Boys seamlessly strings together the series of events that made the band a household name while fusing in dozens of the band’s most popular tunes. The pace of the show moves quickly, hopping from one scene to the next through music and an action-packed storyline. This is one of the few shows in Las Vegas that has an intermission (exactly eight minutes), making it one of the longest productions in the city. Nonetheless, time goes by fast as a leap back in history is sped up in front of the audience’s eyes.

The musical talent in the Jersey Boys is astounding, and listening to the show is like sitting in on a Four Seasons show. In fact, two of the cast members actually toured with Frankie Valli at one point of time. An overwhelming majority of the audience is in its 50s and 60s, and everyone gets into the show, sometimes singing along, occasionally bursting out in a standing ovation. The part of Frankie Valli is so trying on the vocal chords, in fact, that the part is split between two different actors. In many ways, watching the Jersey Boys is basically a live concert/Las Vegas show hybrid, offering both the excitement of a musical performance and the familiarity of a standard stage production.

Though the show certainly speaks to an older audience, most people are familiar with at least a few of the songs produced by the Four Seasons, so toe-tapping fun abounds. In addition, the Jersey Boys will appeal to anyone who appreciates a well-orchestrated, large-scale production. Everything about the show—the story, the music, the casting, the technical aspects—work well together … a sign of a successful Las Vegas show that likely has a long future ahead of it.

The Las Vegas Jersey Boys production is on every night of the week (sometimes twice a night) except for Monday at The Palazzo.

My ticket to Jersey Boys was comped, but all opinions in this piece are my own.