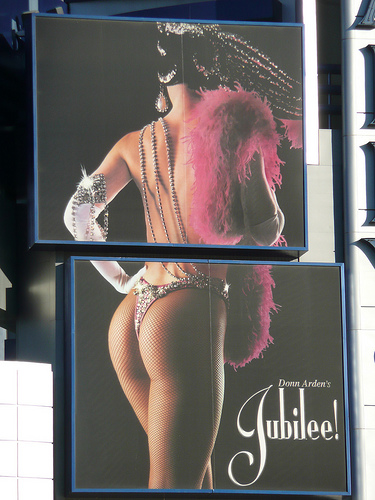 With so many Las Vegas shows playing on the Strip, it can be hard to narrow down the options. Each one tries to outdo the last with the biggest, splashiest, most risque or other “wow”-worthy spectacle.

But if you’d like to see a show that defines authentic Las Vegas, book tickets for Jubilee!, a classic showgirl revue at Bally’s Las Vegas.

Jubilee! is a tasteful topless revue with seven distinct acts interspersed with smaller acts of singing, dancing and acrobatics that serves as a nod to the showgirls who helped define Sin City. The sets are spectacular and offer a backdrop to performances ranging from a theatrical showcase about the sinking of the Titanic to a tribute to Fred Astaire.

The opening number promises “hundreds of girls” (both topless and clothed) but what it doesn’t mention are the 1,000 jaw-dropping costumes. Sequins, feathers, glitter and rhinestones cover every inch of the barely-there clothing, and the massive headpieces weigh up to 35 pounds.

Jubilee! has a running time of 105 minutes, and though it drags a bit at times, it is nonetheless a remarkable performance that captures the essence of old school Las Vegas.

The show has been running since 1981, and there are no signs of it stopping anytime soon. Though the extravagant costumes, oversized sets and iconic musical numbers are reminiscent of the show’s early days, Bally’s keeps the look fresh with open auditions every January and June for new talent.

This show is a good choice for people looking for a glimpse into authentic Las Vegas or for those who enjoy the musicality of shows like “A Chorus Line” or “Chicago.” Due to the nature of the show, no cell phones or cameras are allowed in the theater, and patrons must be 18 or older. Show times are 7:30 p.m. and 10:30 p.m. every night of the week except for Friday. There is a non-topless show every Saturday at 7:30 p.m, and children 13 and older are invited to attend this performance.

Photo by Pete the painter.

Thank you to Pulse of Vegas Blog for bringing our attention to this video.