La Cage Closes Without Warning at The Riviera

The long-running celebrity impersonator show “An Evening at La Cage” was closed without warning on Monday, February 9th, 2009. 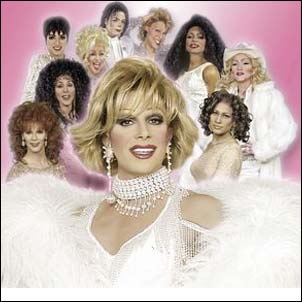 TIcket sales had been sluggish for a while for the show, which headlined at The Riviera, but the abrupt shut-down took many by surprise.

According to reports, the cast wasn’t even informed until after that night’s performance, when producer Norbert Aleman broke the news to them, then took them out to dinner.

Show lead Frank Marino, who has been with the show since its beginnings almost 24 years ago, wants to reorganize and open up a new show with himself as the producer. In an interview with Mike Weatherford of the Review-Journal, Marino says he would retain the same format, and hopefully many of the same cast.

“Right now I’m in shock,” Marino told Weatherford. “I’ve never had another job in my entire life. I know nothing else.”

In addition to Marino, who played the Mistress of Ceremonies in the guise of Joan Rivers, the others in the show who are now having to seek new opportunities are Lane Lassiter, who played Michael Jackson; Steven Wayne, who played Cher; Ryan Zink, who performed as Reba McEntire; Brent Allen as Bette Midler; and Crystal Woods as Diana Ross, along with Frank’s understudy James Henderson.

“An Evening at La Cage” first appeared in Vegas in September of 1985. It was originally scheduled for a three month run at The Riviera, but proved so popular it just kept getting extended to the point where it was a Las Vegas institution.

Even as recently as a few years ago, the show was so popular that Mayor Goodman proclaimed Feb 1, 2006, as “Frank Marino Day” and presented him with a key to the city. Marino also has a star on the Strip’s Walk of Stars and a street named in honor of him.

Aleman reportedly has plans in the works to do a reality show about creating a Vegas show similar to “La Cage,” but no further details have been released.

His other show at The Riviera, “Crazy Girls” reopens this month after a January hiatus.

Even with declining ticket sales, it would have been nice for there to be some final swan song so fans could try to see the show one more time. But I guess that’s Vegas showbiz for you.